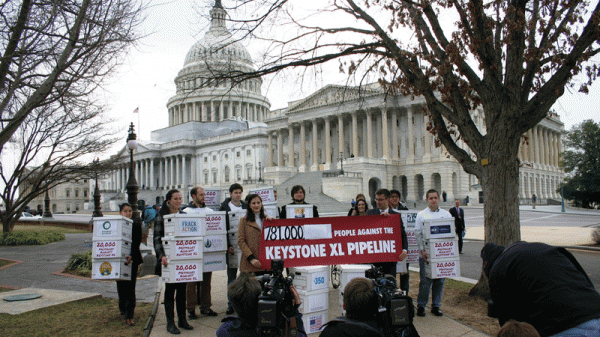 Protesters gather outside the Capitol to urge senators to reject Keystone (Pic: 350.org/Flickr)

The immediate future of the controversial Keystone XL pipeline hangs in the balance, with supporters requiring one more vote to pass the motion through the Senate later today.

Mary Landrieu, the Democrat Senator pushing the bill, needs 60 votes to send it to President Barack Obama, who is likely to veto any new proposal.

With 45 Republicans and 14 Democrats agreeing to back the bill, the next 12 hours will be crucial to the future of the pipeline.

“Everyone’s scrambling for the last vote. We remain hopeful that senators will stay off this bad bill and vote it down,” said Jake Schmidt from the US-based campaign group National Resources Defense Council.

The Keystone XL pipeline, if constructed, would carry 830,000 barrels of carbon-intensive tar sands oil from Canada to refineries on the US Gulf Coast. The project, which was first proposed six years ago, requires State Department permission because it crosses a border.

Environmentalists oppose the bill because they say it would lead to a spike in US carbon dioxide emissions. Supporters say it would bring jobs to the country.

The Republican-controlled House of Representatives has approved the Keystone bill nine times, but so far it has failed to gain the necessary support in the Senate.

But this chamber passed to the control of the Republicans in the recent midterm elections, but they will only assume control from January 2015.

The debate has polarised opinion on all sides of Capitol Hill. In a statement independent senator Bernie Sanders said that it was a “no brainer” to reject the pipeline.

“Instead of increasing carbon emissions and accelerating climate change so oil companies can make more profits, we should put millions of Americans back to work rebuilding our crumbling infrastructure and creating a sustainable energy future,” he said.

Following on from the announcement of a new greenhouse gas reduction target for the US and a contribution of $3 billion in climate aid, Obama also expressed doubts about the Keystone project at a G20 press conference in Australia.

“I won’t hide my opinion about this, which is that one major determinant of whether we should approve a pipeline shipping Canadian oil to world markets, not the United States, is does it contribute to the greenhouse gases that are causing climate change,” he said.

Two senators, Dick Durbin and Sheldon Whitehouse, have said they expect the president to veto the bill.

In an interview with Democracy Now, activist and author Naomi Klein said that a presidential veto could be the “nail in the coffin” for the fossil fuel industry.

“We have this gap between political realities and physical realities,” said Klein. “What is politically possible in the context of the United States clashes directly with what our planet needs to avoid destabilizing climate change.”