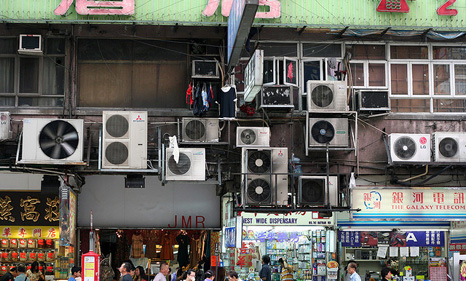 A week of tough negotiations in Paris could decide how the highly polluting gas known as HFCs will be phased out.

Representatives from governments around the world are in the French capital to discuss the Montreal Protocol, the 1987 UN treaty which banned ozone-depleting substances.

Often slated as the world’s most successful environmental treaty to date, the US now wants to use it to regulate HFCs.

HFCs were brought in to replace the ozone-depleting substances banned by the Montreal Protocol. While they do not damage the ozone layer, they have a potent warming effect.

The most common of these gases is 1,430 times more powerful than carbon dioxide. HFCs are primarily used as coolants in refrigerators and air conditioning.

Months of intense bilateral diplomacy by president Barack Obama could help the US in its aim, supported by almost all other major economies.

India and the Gulf States have repeatedly blocked the use of the Montreal Protocol to phase out HFCs. They argue that, as it is not an ozone-depleting substance, it should be regulated under the UN’s climate convention.

These states have also raised concerns about the efficiency of alternative gases, the financial cost of the transition, and the fact that the US holds patents over much of the replacement technology.

Early indications from this week’s meeting are that this deadlock could soon be overcome.

Unlike previous years, India did not oppose the inclusion of the HFC amendment on the meeting agenda.

“In past years, the form has been to whinge and complain and carry on, then demand the HFC proposal should not even been discussed. The fact they have not rehearsed those arguments again is significant,” said Brent Hoare, a policy advisor at the Australian Refrigeration Association.

It is likely that a recent agreement between Obama and Indian prime minister Narendra Modi is behind the more peaceable approach.

In September, the two leaders issued a joint statement saying that both countries “recognized the need to use the institutions and expertise of the Montreal Protocol to reduce consumption and production of HFCs”.

Several Gulf States, including Kuwait and Jordan, have continued to oppose the measure – although Hoare added that serial blockers Saudi Arabia had observers scratching their heads by unexpectedly dropping their opposition to the discussion.

Any decisions have to be taken by consensus among parties.

Durwood Zaelke, president of the Institute for Governance and Sustainable Development, told RTCC that he expected to see intense diplomacy in order to bring the Gulf States along with the amendment.

The recent announcement of new climate targets from the US and China had helped to put pressure on the proceedings, he added. In June, President Obama and Xi Jinping agreed specifically to phase down the production and consumption of HFCs.

“It’s incredibly important to have the leaders of two biggest polluters agree on the CO2 side and the HFCs. This is having an effect,” said Zaelke.

“If you look at countries left opposing, it’s a very small number. People here are under the impression that the amendment is just a question of when do we do it.”