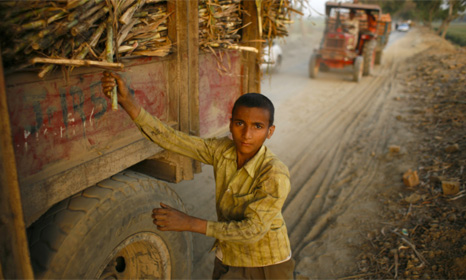 Some sugarcane factories in India run on renewables thanks to the CDM (Pic: Adeel Halim/UNFCCC)

The main tool that funnels finance to developing countries could get a new lease of life from a possible global climate deal at the end of next year, as deeper carbon targets will mean more demand for offsets, the head of the UN’s main carbon offset scheme said.

Hugh Sealy, who was recently elected as chair of a panel that overseas carbon reduction projects in developing countries, said the Kyoto Protocol’s Clean Development Mechanism (CDM) would remain relevant for policymakers despite chronic oversupply and bargain basement prices.

A surplus of offset credits in EU’s emissions trading scheme and proposals by Brussels policymakers to do without the credits means has raised fears that the CDM is in terminal decline, but Sealy said the $300 billion UN scheme could make a comeback later in the decade.

“The CDM remains the only viable international currency in offset credits that we have, and raised ambition in any post-2020 agreement means prices are bound to rise, rekindling interest from investors,” said Sealy, a longtime negotiator for Grenada, in an interview with RTCC.

Controversy about the environmental integrity of some projects, a lack of certainty at climate talks on a future role for offsets and gripes about bureaucracy have been a major headache for the UN-appointed panel over the last decade.

But Sealy said he is satisfied that improvements to the scheme had struck the right balance between the needs of investors and scrutiny by green groups.

“In my own region the CDM would have helped speed up the use of clean energy but by the time opportunities improved for smaller projects in the Caribbean and Africa, the prices collapsed because of oversupply. It’s as if the music was turned off,” Sealy said.

Report: Global carbon market could grow to $87 billion in 2014

Prices for UN-backed offsets have collapsed 95% collapse since their peak in 2008, meaning new projects have slowed to barely a trickle.

But if negotiators overcome years of deadlock and agree a new climate deal to take effect after 2020, then developing countries are likely to consider the CDM as a way of reaching deeper targets to cut emissions of climate-changing gases, he added.

“For the CDM it’s crucial to seek out new markets, a lot more countries will be required to cut emissions in a post-2020 treaty and there’s a whole framework in place that can measure emissions cuts and verify them,” Sealy said, pointing to the growth of emissions trading schemes in both developed and developing countries.

A report from a pro-carbon trading lobby earlier this month heralded the growth of cap-and-trade schemes worldwide, but few besides the EU ETS have so far allowed the use of the UN-backed credits.

The EU has proposed not to rule out the use of CDM credits completely after 2020, and may use offsets if sceptical member states are persuaded to deepen emissions cuts beyond the 2030 target of 40% outlined in January by the European Commission.

“We will continue to lobby Brussels for a continued role for the CDM but we’ve learnt our lesson not to rely on one demand source (the EU) for credits. I expect the evolution of the emerging schemes worldwide, and potential for growth in the voluntary market, will benefit the CDM,” Sealy said.

Supporters of UN-backed offsetting will have to wait and see if talks on reducing global emissions from the aviation sector could allow the use of offsets.

And in the shorter term developers of projects fret that some schemes will wither on the vine because of a lack of cash.

Last month a group that represents project developers say that abandoned projects would vent climate-changing gases into the atmosphere rather than pay fees to the UN to keep their projects going.

Such a scenario would be a further blow to a scheme that is estimated to have generated $300 billion of finance for projects such as wind turbines and energy efficiency in fast-growing developing economies.

Concerns that UN’s offset scheme is in terminal decline were compounded last month by Norwegian certification company DNV’s decision to with withdraw from checking projects.

But Sealy said his panel has worked hard to keep administration costs low for developers.

He said: “A few very small projects may decide to stop operating but we won’t see larger schemes that cut powerful greenhouse gases falling by the wayside. They’ll continue to operate.”