Desmond Tutu: Rejoice in opportunities for a cleaner planet

The opportunities to tackle climate change are cause for “hope and rejoicing”, says Archbishop Desmond Tutu.

The Nobel peace prize winner and retired Anglican bishop led a service at Copenhagen Cathedral on Tuesday to mark the release of the final instalment of the UN’s IPCC climate science report.

Speaking via video link, he told a congregation of scientists, dignitaries and politicians that God had provided new ways of generating electricity, which could replace the dirty fossil fuels mainly responsible for warming the planet.

“We know that if we turn to making all things new, we can get our energy needs from today’s energy resources, like the sun and the wind and ocean currents,” he said.

“Just imagine a new world without smog in the air, pollution and the noise of the internal combustion engine. Just imagine again experiencing fresh air, clean rivers and springs of water and mountains that have not had their tops taking of for coal.

“Just imagine the beautiful world that our hearts know is possible. God will enable us to bring it about if we follow God’s universal laws for all of life.”

Tutu recommended a four-point plan to “nudge” the fossil fuel industry, which he said will “probably be reluctant to change.”

He said South Africa, his home country, provided an example of what can happen when a tightly controlled bubble of wealth is burst open.

It is not the first time he has referenced the need for apartheid-style tactics to tackle climate change.

The archbishop has previously called for a boycott of fossil fuels in the same way countries divested from South Africa to pressure the country to stop racial segregation. 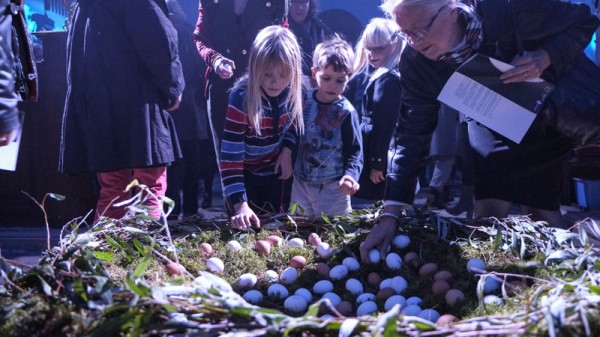 The congregation was invited to take eggs and place them in a nest in the middle of the churhc as a symbol of the fragility of the future (Pic: Rune Hansen)

The UN’s science report has been released in instalments over the past year – the culmination of six years of voluntary work by 830 scientists.

The synthesis report, which will be released on 2 November after a week of negotiations by governments, brings the findings of the three major instalments together in a 100-page document.

The timing is crucial, with governments hoping to sign off a new deal to tackle climate change in December 2015 in Paris.

Rajendra Pachauri, the chair of the Intergovernmental Panel on Climate Change, which produces the reports, said that it would provide a “road map” to this agreement.

At the religious service in Copenhagen, prayers were also read by the Archbishop of Polynesia, one of the most climate-vulnerable regions of the planet, alongside a message from the Vatican.