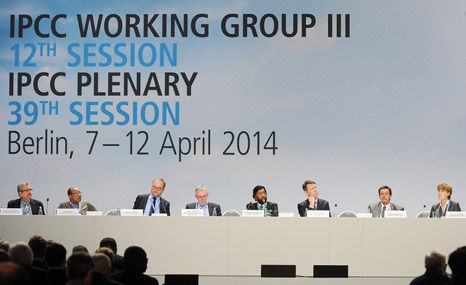 A coalition led by Saudi Arabia attempted to mask their contribution to rising levels of greenhouse gas emissions during discussions at the UN’s most recent climate science meeting.

That’s the charge laid by John Broome, a British philosopher and economist at Oxford University, and contributing author to the Intergovernmental Panel on Climate Change’s Fifth Assessment Report.

He’s not the first to make these accusations – that prize goes to Giovanni Baiocchi, an economist at the University of Maryland.

But Broome is the first to offer a compelling narrative of how the four–day Berlin meeting of IPCC Working Group 3 scientists in April unfolded.

In a detailed blog published on May 20 he says the ‘Summary for Policymakers’, a concise document that pulls together thousands of pages of work, was “mutilated” by government officials.

“The degree of compression in the SPM meant that every sentence counts. In drafting it, we authors each found ourselves defending our favourite sentences,” Broome writes.

“Some sections were cut to pieces because the different views of the delegations turned out to be irreconcilable.” 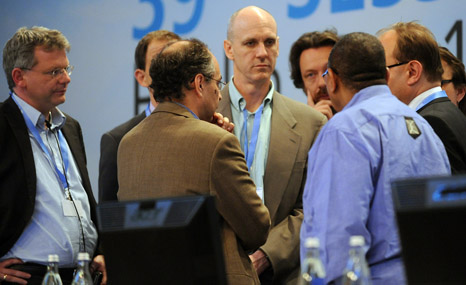 The final session of IPCC WG3 talks were punctuated by tough negotiations between delegates (Pic: IPCC)

Broome contends that in the early hours of April 12, a coalition of countries led by Saudi Arabia insisted that all figures showing emissions of greenhouse gas from countries classified by their “income group” were deleted. Other reports indicate China was also part of this push.

“Other countries strongly opposed the deletion, but could not prevent it because a consensus is required for everything in the SPM … the time by now was 4:15 am,” writes Broome.

He then details how a series of alternative ‘texts’ were dismissed, before a weary plenary decided to approve the section of the SPM without mentioning income groups.

“Compromises ran out, and in the end Saudi Arabia got its way completely over the references. All references from the SPM to any part of the main report that mentions income groupings were deleted,” he says.

“By 7:30 am on Saturday green highlighting had spread across all the surviving text, and the meeting ended. The last session had started at 9:00 am on Friday, and had been interrupted only twice for meal breaks amounting to one and a half hours together.”

He adds: “Had we jointly threatened to withdraw our names, we might have had an effect. But at 4:30 am, with authors scattered around the conference room and some not entirely awake, no united front of authors was organized.”

It should be stressed the SPM is the only part of the IPCC texts that receives this level of political interrogation or interference from governments – perhaps because they know it’s the only part most policymakers will read.

This can then form the basis of various negotiating positions at UN climate talks, which are heating up as a global emissions reduction deal scheduled to be signed off in December 2015 draws close.

The original findings remain untouched, and could feed into the IPCC’s ‘synthesis study’, due out later this year.

Broome says the deleted information is important for making good climate policy, describing himself “angry at the censorship… and astonished by the process”, adding: “I would not have missed it for anything”.

Some of his colleagues agree with him. “A strikingly large amount of scientific material [was] stripped out,” says David Victor, a political scientist at the University of California, San Diego, told Science Mag.

Others are more circumspect. In an interview with RTCC, Yacob Mulugetta, coordinating lead author on the IPCC chapter which focused specifically on energy described the final SPM as “fairly balanced” and “not hugely changed from before.”

But he admitted there was huge pressure from some countries to change the text. “In the plenary process, that’s somewhat different, because countries are looking at their own vested interests, how their energy system is evolving and so on,” he said.

It’s safe to assume that the same tensions between various country groupings will be on display at the next round of UN climate talks in Bonn in two weeks’ time, with all sides keen to spin their latest clean energy schemes and complain others are not doing enough.

Perhaps the best advice comes from Piers Forster, an IPCC author and respected climate scientist from Leeds University, in the tweet below.