European leaders agreed a package of climate change and energy targets late last night, which goes towards a global deal 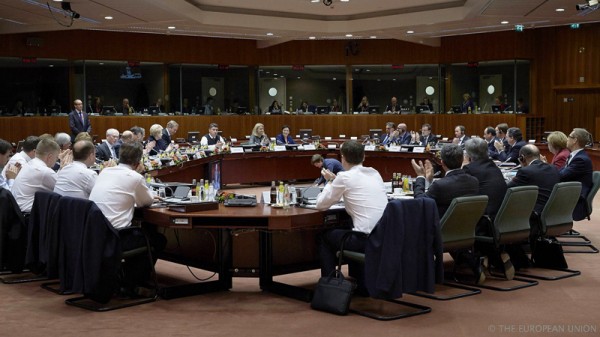 The European Union must cut its greenhouse gas emissions by “at least” 40% by 2030, after leaders struck a deal late last night.

The bloc must get 27% of its energy from renewable sources, although this is not binding on member states.

There is an “indicative target” to improve energy efficiency by 27%. That figure was changed from 30% in earlier drafts.

Under the deal, there were some sweeteners to win round eastern European countries concerned about the impact on their economies.

And it renews Europe’s commitment to link up countries’ electricity networks, a key concern for Spain and Portugal. The goal is to build cables that can carry 15% of national generating capacity.

Herman Van Rompuy, president of the European Council, said: “It was not easy, not at all, but we managed to reach a fair decision.

“It sets Europe on an ambitious yet cost-effective climate and energy path.

“Climate change is one of the biggest challenges of mankind. Ultimately, this is about survival.”

The package represents the first emissions reduction commitment towards a global climate deal, set to be signed in Paris next year.

It allows the EU to “bring a positive message” to international talks, said Van Rompuy.

All developed economies have to publish climate action plans by early 2015.

A spokesperson for UN secretary-general Ban Ki-moon commended the plans.

“EU leaders have once again placed Europe in a leading position with an ambitious emissions reduction target,” the spokesperson said.

“In adopting this target, the EU has shown that addressing global climate needs is in its own long-term interest.

“The decision will lead to tangible and significant contributions towards our collective effort to keep temperature rise to less than 2C this century.

“The decision will also set a new standard for climate ambition for all countries in support of the upcoming global negotiations.”