With just over a year to reach a global climate deal in Paris, negotiators are struggling to get past old conflicts 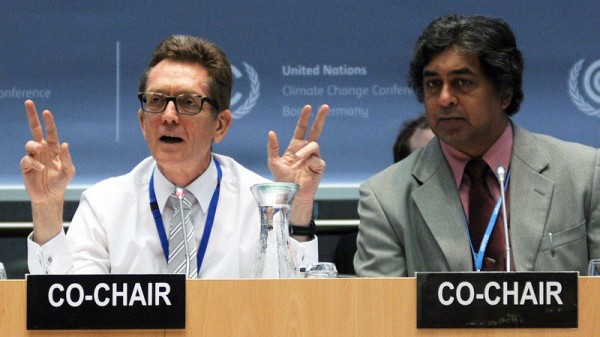 Deeply entrenched positions are holding back attempts to negotiate a draft text for the UN climate deal at talks this week in Bonn.

In just over a year, countries must reach consensus on politically difficult issues for an agreement in Paris, including whether rich countries should compensate now for their historical emissions.

Officials met in Bonn for what co-chairs of the process called the “bridge building session”. But remarks from some negotiators and officials guiding the talks showed there was a way to go.

“Sticking to positions is not negotiating,” said Kishan Kumarsingh, co-chair of the talks, opening the session on Monday.

Speaking on behalf of G77+China, a large bloc of developing countries, a negotiator from Bolivia said on Tuesday: “It is important to listen to each other. We need a more interactive and dynamic process. We need to question. We need clarifications and to look for common ground, even texts, if possible.”

As the EU heads into domestic negotiations over its 2030 targets, a statement sent out by a bloc of countries including India, China, Venezuela, Saudi Arabia and Ecuador, said that they were “gravely concerned” that rich countries “no longer seem willing to live up to their commitments”.

The statement accused developed countries of backing out of promises to reduce greenhouse gas emissions and provide support to developing countries.

This group, known as the like minded developing countries (LMDCs), is pushing back against the notion that rich and poor countries must both take on binding commitments under the new deal.

US negotiator Todd Stern has made clear that any deal which perpetuates the division between developed and developing countries – as used in the Kyoto Protocol, the UN’s only climate treaty to date – will be a non-starter.

But the controversy at the heart of this week’s negotiations is what information countries need to include when they submit their contributions to the new deal to the UN by March next year.

Some want these pledges to include mitigation only, while others want to see promises of finance, adaptation, technology transfer and other elements that will be included in the final agreement.

The US is backing a proposal put forward by New Zealand, also backed by Australia. But it has not been welcomed by some other blocs, who reject its outright focus on mitigation.

Andres Pirazzoli, an envoy representing Chile, told RTCC that countries were beginning to show flexibility on the talks relating to pre-2020 ambition on climate action, but that the spirit of compromise was still lagging in the post-2020 part of the talks.

“The sad thing is – and this is probably the case for the entire history of the negotiations – the most creative, flexible and active listeners in this business are the most vulnerable ones,” he said.

He said the least developed countries, small island states, and the Africa group were working hard to accommodate others, while his own grouping – a progressive Latin American alliance called AILAC – was trying to build bridges.

For the session to be a success, he added, there would need to be convergence between countries on the type of information that countries should provide in their contributions to the new agreement, as well as more agreement on how the elements of the final text should work.

A text by the co-chairs of the session, Kishan Kumarsingh and Artur Runge-Metzger, was welcomed by his group as the basis for the negotiations. “We feel very comfortable empowering the co-chairs to guide our negotiations,” said Pirazzoli.

The co-chairs said at the outset they had nicknamed this round of negotiations the “bridge building session”.

But their approach has rankled with other countries, with some rejecting outright the text compiled by the co-chairs on the information that parties should put forward.

“There was a general expression of unhappiness with the co-chair’s text,” said Alden Meyer, an observer of the negotiations from the Union of Concerned Scientists.

The like minded developing countries did not think the co-chairs should be involved with drafting the text, he explained.

They also complained it was overly concerned with mitigation, at the expense of elements such as finance and adaptation.

The president of the next meeting in Lima, Manuel Pulgar Vidal, stressed that he wanted parties to arrive with “clear and substantive” ideas for the draft text, but he was confident that countries were beginning to move towards consensus.

Despite his confidence, the UN is already considering when it will hold extra sessions for negotiations next year, as diplomats attempt to cram in all the work that needs to be done ahead of next year’s vital Paris deal.

“The word I should use is hope. I’m hopeful… Nothing has really taken shape,” said Ruel Yamuna, a diplomat representing Papua New Guinea.