In Germany and Italy, for different reasons, governments are pushing dirty sources of energy as “transition fuels” 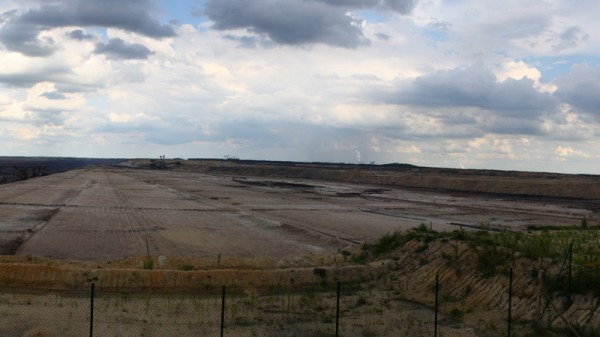 Strip-mining for lignite flattens the landscape in east Germany

When the bulldozers are gone, not much is left. “Over there was the village of Kausche, around 800 people lived there,” former school teacher Reinhard Kapelle points north over the vast, scarred landscape towards an indefinite point in the cloudy sky.

The effects of lignite, or brown coal, extraction are obvious here in the east German region of Lusatia. An observation deck framed by banners of the Swedish energy company Vattenfall permits a glimpse onto the mine: what was once green farmland has turned into a raw brown landscape.

On the horizon, you can see the silhouette of the power plant fed by the coal, called Schwarze Pumpe – the Black Pump. To feed it, Vattenfall’s massive machines have stripped the soil down 90 to 130 meters. Everything overground had to go.

Among the communities left are the towns of Proschim and Welzow. But under Vattenfall’s plans, as soon as 2024, the village of Proschim will also vanish. Its 360 inhabitants are deeply divided on the issue.

Volker Glaubitz, Proschim’s deputy mayor, is in favour of Vattenfall’s plans. “There must be renewable energy in the future, but right now it is too expensive,” he argues. 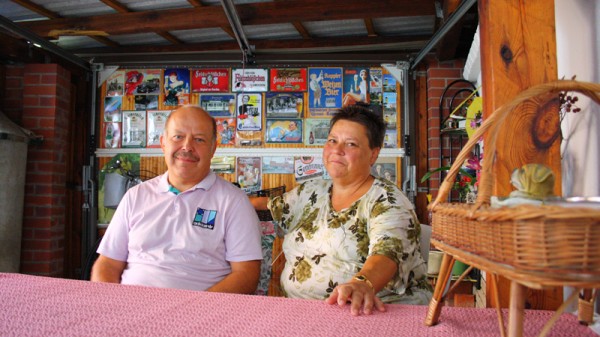 Volker and Ingrid Glaubitz are in favour of the new mine

Across the street, farmer Johannes Kapelle disagrees: “Coal is something that belongs to the past,” he says, proudly presenting his solar panels on the roof and the wind mills behind his house.

Proschim produces more electricity from renewables than it can consume. “So this is really a forerunner village in Brandenburg,” says Daniela Setton, energy expert of Friends of the Earth Germany, “and for this to be destroyed by lignite mining… ridiculous, we cannot accept this.”

Proponents of lignite say it can bridge the gap left as Germany phases out nuclear, but sustainability experts say it is not the best option.

“These are the dirtiest power plants there are,” explains Corinna Klessmann of Ecofys, a consultancy in renewable energy, efficiency and climate policy.

Power plants fed by lignite need to run day and night. They cannot be booted up and down to occasionally substitute temporary shortages of renewables, like in the winter times, when there is less sunlight.

“Gas-fired power plants are a good bridge technology, a good supplement to fluctuating renewable energies, because they are very flexible,” says Klessmann.

But with a gas market depending on Russian imports, the crisis in Ukraine, and lignite coal being the cheapest option, the exploitation of lignite comes in handy for many. The contradiction to Germany’s image as a leader of the energy transition is evident. 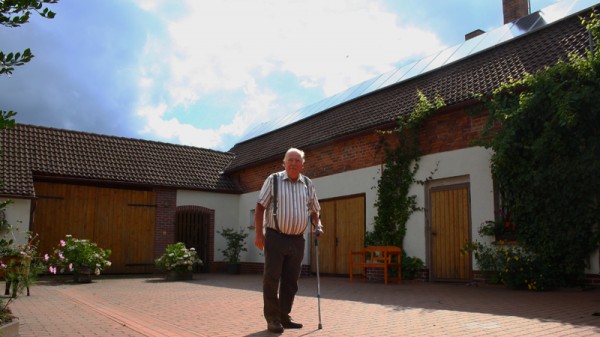 Lusatia has become a focal point for the struggle behind the German government’s “Energiewende” strategy, aimed at making the country a world leader in renewable energy.

The goals are ambitious: until 2020, Germany plans to reduce its CO2 emissions by 40%. But the country is only on track to reach 30% and is not obliged to achieve its self-imposed goal.

“That’s what we criticise. We say it should be fixed by law,” says Daniela Setton of Friends of the Earth.

Germany already produces 25% of its energy from renewables, so it is the lignite-fired power plants that pose the challenge. And Germany is still the biggest emitter of greenhouse gases in the European Union.

First, the reduction of greenhouse gas emissions by 20% compared to the 1990 levels; second, an increase of the share of renewables in the EU’s energy mix to 20%; and third, the a 20% improvement in energy efficiency. These goals are all part of a directive that is now binding for all member states.

But it is up to the single countries to decide what policies to put in place in order to achieve the goals. The EU sets no specific restrictions on the extraction and production of fossil fuels, only an overall emission cap.

The EU’s main policy to discourage coal burning is the emissions trading system (ETS), which puts a price on carbon dioxide pollution for power generators and heavy industry.

But with the economic crisis, demand for emissions allowances dropped and the price with it.

Setton says: “The prices are so down that for example in Germany lignite is the most attractive option on the market.”

The ETS covers the EU’s largest industrial plants including power generation and manufacturing industry. These sectors are responsible for around 45% of the EU’s total greenhouse gas emissions.

Meanwhile, negotiations are ongoing among energy and environment ministers of all member states  to renovate their commitment with new targets for 2030.

In order to keep global warming under the 2°C threshold, the EU has set a roadmap  to cut its greenhouse gas emissions 80% to 95% by the mid-century.

The agreement for the 2030 targets is set to be finalised during a European Council meeting on 23 and 24 October.

Italy is set to preside over that meeting and the inevitable last-minute disagreements.

Whether binding or not, and more or less ambitious, not everyone agrees on the impact of the EU targets in fighting climate change.

“In my modest opinion [they are] completely irrelevant, it’s numbers thrown at random,” says Ugo Bardi, professor of physical chemistry at Italy’s University of Florence.

“What counts is how fast you can go through the transition, and you have to go fast, otherwise it would be too late to… avoid the well-known tipping point of climate change”.

Bardi argues that fossil fuels need to be used wisely to enable the transition to renewables. But in his home country Italy, the economic and societal dynamic is pushing in the opposite direction.

Italy has strong potential for hydroelectric and solar power. It got 13.5% of energy from renewable sources in 2012 and is set to increase that to 17% by 2020.

But at the same time, prime minister Matteo Renzi has signed a law promoting oil and gas exploration and storage. It says these activities “have strategic interest and are of public utility, urgent and not deferrable”.

Donatella Bianchi, president of WWF Italia says: “These actions are dangerous and counterproductive for the future of the country. When deciding over fundamental choices, we need far-sighted and innovative proposals that take account of the growing environmental awareness of citizens.”

Indeed, the lack of a clear, long-term plan in Italy’s energy strategy makes it hard to see the possible new quest for oil and natural gas as a bridge technology, as might be argued for Germany’s lignite. On the contrary, they rather seem the product of a money-oriented choice driven by the economic crisis.

In Italy, explains Bardi, “the GDP has been contracting for seven years in a row and […] the government desperately tries to find money to pay the debt.”

In richer European countries with a growing economy, the energy transition is still a viable and affordable project.

The reversion in Germany to carbon-intensive energy is a result of the old industry’s attempts to remain in control and get as much as what’s left of the cake.

As the case of Proschim shows, even in the country of the “Energiewende”, fiery struggles take place between winners and losers of the transition.

But compared to Italy, Germany still has a quite easy time to carry out its ambitions, as the economy is still growing.

The transition towards renewables and efficiency becomes more difficult for those countries that experience a long-term recession.

Silvia Giannelli, Anja Krieger and Elena Roda are freelance journalists. Their travel and research was co-funded by the European Council’s Mediane programme.