WHO should declare climate change a “health emergency” 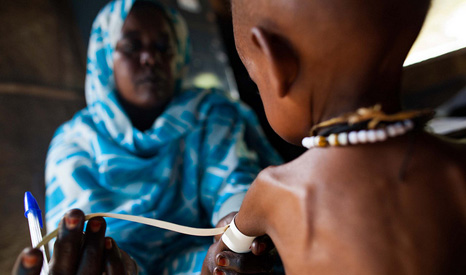 Climate change raises the risk of crop failure and malnutrition, among other health concerns
(Pic: UNAMID)

A leading medical journal has added its voice to calls for climate change to be declared a health emergency.

The British Medical Journal, which has an international reach, last month published its first article purely on climate science.

She urged the World Health Organization (WHO) to announce a global public health emergency in light of the threats posed by rising temperatures.

While such threats may seem less pressing than the deadly Ebola virus outbreak in west Africa, Godlee argued they were more significant in the long run.

“Deaths from Ebola infection, tragic and frightening though they are, will pale into insignificance when compared with the mayhem we can expect for our children and grandchildren if the world does nothing to check its carbon emissions. And action is needed now,” she wrote in an editorial.

The BMJ stance follows the same lines as an open letter from fifteen charities in August.

On the back of the WHO’s first ever international conference on climate change and health, they said it was time to confront the issue.

Climate change has been linked to a range of health risks, from malaria spreading to malnutrition.

As well as advocating for policies to reduce greenhouse gas emissions, the charities said medical organisations could cut their own carbon footprints and divest from fossil fuels.

“Solutions exist and we need to act decisively to change this trajectory.”

UN climate chief Christiana Figueres added: “Climate change is not the equivalent of a disease: it is a symptom. The cause is our unbridled dependence on fossil fuels.”

She encouraged doctors to lobby their governments for stronger action.

Earlier the same month, 12 Australian medical scientists had done just that. They published an open letter asking prime minister Tony Abbott to put climate change on the agenda at the next G20 summit in Brisbane.

One of the signatories, Tony McMichael, said they wanted to spread awareness that climate change “poses risks to much more than the economic status quo”.