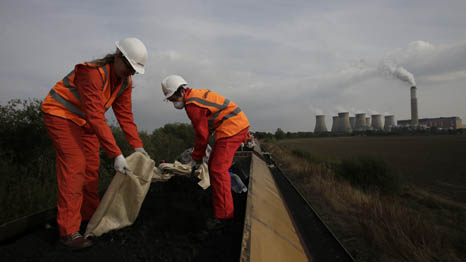 In the UK, 50 Greenpeace activists stopped a train bound for Cottam Power Station, to highlight the climate and health dangers of burning coal.

Meanwhile in Poland, miners blocked a train entering from Russia, which they blame for flooding the market with cheap coal and destroying local jobs.

Greenpeace timed its action to send a message to world leaders at Ban Ki-moon’s climate summit in New York.

“We’re doing exactly what leaders in New York and here in the UK should be doing, which is to stand in the way of the massive damage to our health and climate inflicted by coal,” said campaigner Will McCallum.

“Our political leaders promised voters they would put an end to dirty coal, yet the UK is burning huge amounts just because it’s more lucrative for the energy companies to use coal instead of gas.” 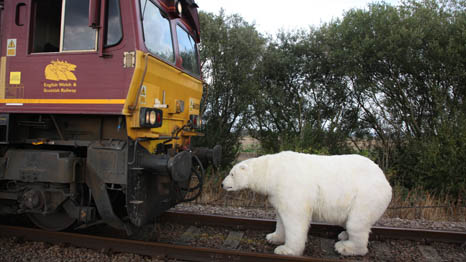 The activists flagged down a train carrying 1,500 tonnes of coal towards Cottam and placed a model polar bear in its path, to symbolise the victims of climate change.

They then scaled the wagons with ladders. British Transport Police were called to the site. EDF Energy, which runs the Cottam plant, said its operations had not been affected.

In a common thread with the Poland protest, Greenpeace noted that Russia supplies roughly half the UK’s coal imports.

Europe is seeking to wean itself off Russian fossil fuels in light of recent conflict in the Ukraine. 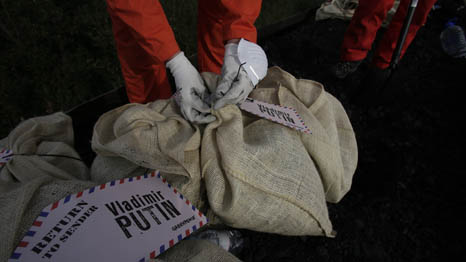 Return to sender: around half the UK’s coal imports come from Russia
(Pic: Greenpeace)

McCallum said: “The UK’s addiction to coal is giving us climate damage, air pollution, and a dangerous reliance on the Russian oligarchs who supply 51% of the UK’s coal imports.

“It’s time our political leaders made good on their pledges by opposing new subsidies, stopping unnecessary coal burning, and setting out a clear plan to retire our outdated coal plants within the next ten years.”

A number of UK coal power stations are closing in the next few years as a result of European emissions legislation.

The government has banned new coal plants that are not equipped with carbon capture and storage.

At the same time, however, coal generators are eligible for new financial support to maintain security of electricity supply, which could allow them to stay open.

Activist Jacky Westwood said: “Scientists agree that the fossil fuels we burn, and especially coal, are the cause of the climate crisis threatening lives across the world. The fate of entire countries and species hangs in the balance. Extending the lifespan of our polluting coal plants would only makes this worse. It’s morally indefensible.”

In Poland, by contrast, the government has explicitly set out a long term future for coal generation, which supplies 90% of the country’s electricity.

As Warsaw hosted last year’s UN climate talks, Polish miners demonstrated outside to save their jobs in the face of moves to curb carbon emissions.

It was the same concern for domestic employment that spurred the Solidarity union to block a Russian train last night.

“Right now about 80 percent of tenders for coal supplies to units run from the state budget are won by suppliers of imported coal, because they offer dumping prices,” union leader Jaroslaw Grzesik told the Moscow Times.

Last month, there were reports the Polish government was considering a ban on Russian coal imports.

And the Solidarity Union plans to continue blocking trains from Kaliningrad in Russia.