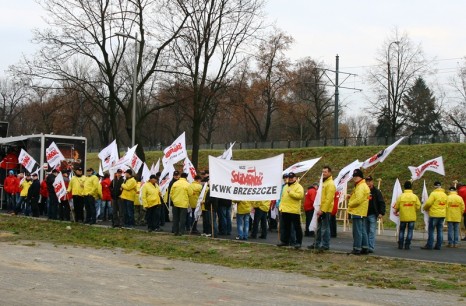 By Komila Nabiyeva in Warsaw

Poland’s mining branch of the Solidarność trade union yesterday staged protests against UN climate talks next to the conference vicinity National Stadium in Warsaw.
Several dozen miners from Poland’s industrial Silesia region protested “against what has been happening in the media since the start of the COP”.
There is a campaign against Polish coal — our biggest national treasure—which gives us energy,” chairman of the Poland’s mining trade union Solidarność, uniting some 40,000 miners, Jaroslaw Grzesik said.
“Certain organizations and media are lying coal is killing people and destroying the environment. We came to show that there is a new technology that allows connecting coal industry with the environment”, Grzesik added.
Grzesik said they were protesting against the European Union, which blocks “transforming the coal industry.” He said Poland could build new clean coal plants “that would use less coal and emit 90% less”.He added, “We are told to build new plants based on Russian gas and imported nuclear power, whereas we have rich coal resources”.
Grzesik added that the union is not against renewable energy, “but you have to tell the truth to the people that it is more expensive. If there are no coal power plants, we will have to pay five times more for our energy”.
The Polish Climate Coalition, an association of 23 environmental NGOs, criticized the protest.
“It is true that 30 years ago, coal was the engine of the whole Polish economy. But now Poland is a net importer of coal. In 40 years we will not have coal resources left. If we continue with coal, we will have to import it. I do not know if the miners know about it,” Ilona Jędrasik, Policy officer of the Polish Climate Coalition said.
“To be energy-independent, we have to invest in renewable energy and energy efficiency,” Jędrasik added.