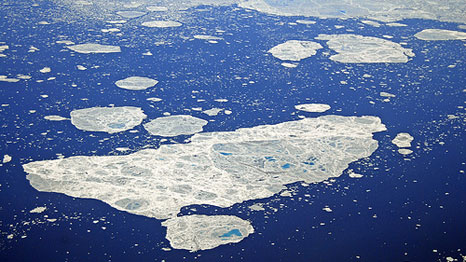 The minimum ever recorded at the North Pole was 3.29m sq km in 2012 – and the eight lowest years have been the last eight years.

Meanwhile, sea ice in the Antarctic has advanced beyond 20m sq km for the first time – and it is still growing.

Ice levels in the Arctic have recovered from their all-time low, but are still on a shrinking trend, said Julienne Stroeve of the National Snow and Ice Data Centre. “We have been telling this story for a long time, and we are still telling it,” she said.

NSIDC records showed that, this year, ice momentarily dipped below 5million sq km to 4.98m on 16 September, but the official figure is taken from a five day average.

Satellite data shows that one part of the Laptev Sea was completely clear from sea ice for the first time this summer.

One of the most important questions for climate scientists is when the Arctic will experience its first sea ice-free summer.

Peter Wadhams from the University of Cambridge, also speaking at the Royal Society, predicted that this could happen within the next five years.

“I would still nail my colours to 2015 as a possibility [for an ice free Arctic in the summer],” he said, adding that projections that there could still be ice by the end of the century were “so unrealistic” based on projections of CO2 emissions that they shouldn’t have been included in the IPCC.

The majority of the scientists at the conference disagreed with his statements, however, with NASA’s Gavin Schmidt describing them as “unjustified” and not based in physics.

Rod Downie, head of WWF UK’s polar programme, said that this year’s new Arctic minimum should prompt new action from leaders as they meet in New York this week for a landmark UN summit hosted by Ban Ki-moon.

“As David Cameron prepares to meet other global leaders at the UN climate change summit in New York, the increased frequency of extreme weather that is predicted for the UK as a result of a warming Arctic should serve as a reminder that we need urgent action now to tackle climate change,” he said.

When it came to the Antarctic, scientists admitted they were puzzled by the expanding sea ice.

“All the climate models say it should be going down and it’s actually going up, and it’s making news,” said Shroeve, adding that the trend is expected to give ammunition to those seeking to discredit climate science.

She suggested that one reason for the increase could be strengthened polar winds pushing ice out from the shore, with no further land to constrain it from expanding. The extreme variability of natural processes in the region could also be behind the jump in ice cover.

The majority of ice at the South Pole is on land, and researchers have found that those ice caps are shrinking. Another study said Antarctic ice melt could raise sea levels up to 37cm by the end of the century.