Arctic warming faster than most of Earth, while Antarctica appears to remain locked in a frigid embrace 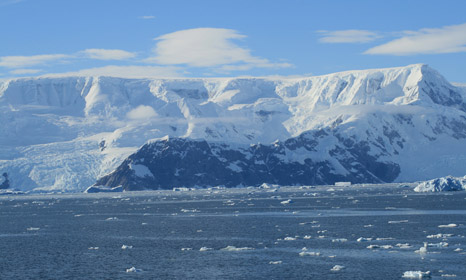 Rising concern: warming would cause more Antarctic ice to break off and melt

An international study says warming is affecting not only the Arctic but also the Antarctic – and that could significantly raise global sea levels much faster than previously predicted.

The effect of climate change on the world’s two polar regions looks like a stark contrast: the Arctic is warming faster than most of the rest of the Earth, while most of Antarctica appears to remain reassuringly locked in a frigid embrace.

But an international scientific team says the reality is quite different. The Antarctic is warming too, it says, and the southern ice could become the main cause of global sea level rise during this century − far sooner than previously thought.

The study, led by the Potsdam Institute for Climate Impact Research (PIK) in Germany, found that ice discharge from Antarctica could contribute up to 37 centimetres to global sea levels by 2100.

The study is the first comprehensive estimate of the full range of Antarctica’s potential contribution to global sea level rise based on physical computer simulations. It combines state-of-the-art climate models and observational data with various ice models.

The results of the study − published in the European Geosciences Union’s journal, Earth System Dynamics − reproduce Antarctica’s recent contribution to sea level rise, as observed by satellites over the last two decades.

“If greenhouse gases continue to rise as before, ice discharge from Antarctica could raise the global ocean by an additional 1 to 37 centimetres this century,” says the study’s lead author, Anders Levermann, PIK professor of dynamics of the climate system.

“This is a big range – which is exactly why we call it a risk. Science needs to be clear about the uncertainty, so that decision-makers on the coast and in coastal mega-cities like Shanghai or New York can consider the potential implications in their planning processes.”

The scientists analysed how rising global average temperatures resulted in a warming of the ocean around Antarctica, influencing the melting of the Antarctic ice shelves.

Antarctica currently contributes less than 10% to global sea level rise and is a relatively minor player in comparison with the impact of the oceans’ increasing thermal expansion and the melting of glaciers.

But the major contributors to future long-term sea level rise are expected to be the huge volumes of ice locked up in Greenland and the Antarctic ice sheets. The marine ice sheets in West Antarctica alone could raise sea level by several metres over a period of several centuries.

The study’s computed projections for this century’s sea level contribution are significantly higher than the upper end of the latest projections by the Intergovernmental Panel on Climate Change. These suggest a probable rise by 2100 of around 60cm, although other estimates put the figure almost twice as high.

Even if governments can agree and enforce strict climate policies limiting global warming below the international target level of a maximum 2°C increase, Antarctica’s contribution to global sea level rise is expected still to range from 0 to 23cm this century.

A co-author of the study, Robert Bindschadler, from the NASA Goddard Space Flight Center, said: “This paper is a critical input to projections of possible future contributions of diminishing ice sheets to sea level by a rigorous consideration of uncertainty of not only the results of ice sheet models themselves but also the climate and ocean forcing driving the ice sheet models.

“Billions of dollars, euros, yuan, etc, are at stake, and wise and cost-effective decision-makers require this type of useful information from the scientific experts.”

But major modeling challenges still remain. Datasets of Antarctic bedrock topography, for instance, are still inadequate, and some physical processes of interaction between ice and ocean cannot yet be sufficiently simulated.

The team also emphasises that the study’s results are limited to this century, while all 19 of the comprehensive climate models used show that the impacts of atmospheric warming on Antarctic ice shelf cavities will hit with a time delay of several decades.

However, Levermann says: “Earlier research indicated that Antarctica would become important in the long term. But pulling together all the evidence, it seems that Antarctica could become the dominant cause of sea level rise much sooner.” − Climate News Network