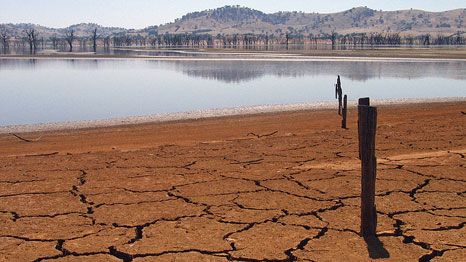 American scientists have just confirmed that parts of Australia are being slowly parched because of greenhouse gas emissions – which means that the long-term decline in rainfall over south and south-west Australia is a consequence of fossil fuel burning and depletion of the ozone layer by human activity.

Such a finding is significant for two reasons. One remains contentious: it is one thing to make generalised predictions about the consequences overall of greenhouse gas levels, but it is quite another to pin a measured regional climatic shift directly on human causes, rather than some possible as-yet-unidentified natural cycle of climatic change.

The other is contentiously political. Australia’s prime minister, Tony Abbott, has in the past dismissed climate science as “crap”, and more recently has cut back on Australian research spending.

Australia has already experienced a pattern of heat waves and drought – punctuated by catastrophic flooding – and even now, in the Australian winter, New South Wales is being hit by bush fires.

Tom Delworth, a research scientist at the US National Oceanic and Atmospheric Administration, reports in Nature Geoscience that he and a colleague conducted a series of long-term climate simulations to study changes in rainfall across the globe.

One striking pattern of change emerged in Australia, where winter and autumn rainfall patterns are increasingly a cause of distress for farmers and growers in two states.

The simulation showed that the decline in rainfall was primarily a response to man-made increases in greenhouse gases, as well as to a thinning of the stratospheric ozone layer in response to emissions of destructive gases by human sources.

The computer simulations tested a series of possible causes for this decline, such as volcanic eruptions and changes in solar radiation. But the only cause that made sense of the observed data was the greenhouse explanation.

South Australia has never been conspicuously lush and wet, but decline in precipitation set in around 1970, and this decline has increased in the last four decades. The simulations predict that the decline will go on, and that average rainfall will drop by 40% over south-west Australia later this century.

Dr Delworth described his model as “a major step forward in our effort to improve the prediction of regional climate change”.

In May, scientists proposed that greenhouse gas emissions were responsible for a change in Southern Ocean wind patterns, which in turn resets the thermostat for the world’s largest island.

Australian scientists report in Geophysical Research Letters that they, too, have been using climate models to examine Antarctic wind patterns and their possible consequence for the rest of the planet.

“When we included projected Antarctic wind shifts in a detailed global ocean model, we found water up to 4°C warmer than current temperatures rose up to meet the base of the Antarctic ice shelves,” said Paul Spence, a researcher at Australian Research Council’s Centre of Excellence for Climate System Science. This temperature rise is twice previous estimates.

“This relatively warm water provides a huge reservoir of melt potential right near the grounding lines of ice shelves around Antarctica,” Dr Spence said. “It could lead to a massive increase in the rate of ice sheet melt, with direct consequences for global sea level rise.”

Since the West Antarctic ice sheet holds enough water to raise sea levels by 3.3 metres, the consequences would indeed be considerable.

“When we first saw the results it was quite a shock,” Dr Spence said. “It was one of the few cases where I hoped the science was wrong.”