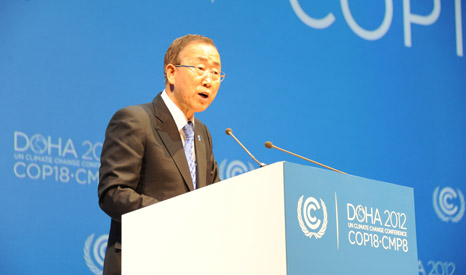 Countries will have agree a global climate deal almost immediately, and participate fully, to limit global average warming to safer levels, according to a major UN panel report.

Both carbon emissions and the impacts of climate change are beyond national borders, meaning that without collaboration countries will always do less: if one country cuts emissions on its own, others which do nothing will still reap the benefit of slower climate change.

Negotiations to agree a global climate deal have spluttered for decades, snagged on sharing the financial cost of cutting emissions, with the biggest disagreement between rich and large emerging economies.

Countries have agreed that global average warming should not rise more than 2 degrees Celsius above pre-industrial levels, based on a scientific consensus of the dangers, but so far have failed to agree how to achieve that goal.

“It would be very hard to attain widely discussed goals of stabilizing warming at 1.5 or 2 degrees without almost immediate and full participation in international agreements that coordinate substantial emission reductions,” the IPCC said, in its report published on Sunday.

The IPCC reviews the latest published science on climate change every five to six years. Sunday’s report was the last instalment of the latest report, focusing on policy options to cut emissions, and compiled by some 235 authors.

They said that “business as usual” was not an option, given expected temperature rises of 3 to 5 degrees Celsius without efforts to curb emissions, implying dangerous sea level rise, floods and droughts.

The IPCC report underscored that a global deal was essential for progress.

“A defining characteristic of the climate change issue is that most its sources are truly global. Even the biggest emitters are mostly affected by emissions from other countries rather than principally their own pollution.”

Equally, it found that action so far was inadequate.

The 2008-2012 Kyoto Protocol failed to limit the emissions of the world’s top two emitters, after the United States said it could not participate without binding limits on China, which escaped targets as a developing country.

In 2009, the global financial crisis intervened, deflecting countries from agreeing a Kyoto successor at a summit convened for that purpose.

In 2010, they agreed voluntary emissions targets through 2020, at a U.N. conference in Cancun, Mexico.

The pledges put atmospheric greenhouse gases on a trajectory which the IPCC deemed would miss the 2 degrees target, which was equivalent to less than 530 parts per million of greenhouse gases in  the atmosphere.

Policy attention is now on a U.N. summit in Paris next year, when countries are meant to agree ambitious targets to limit emissions after 2020.

Developing countries now have policies which covered a greater part of their greenhouse gas emissions than developed countries, the IPCC said, implying that the scope for disagreement over sharing costs may be falling.

Developing countries will have to make the biggest carbon cuts, given their economies were growing fastest, but rich countries would have to help cover the cost, the IPCC report said.

“Studies estimate that the financial transfers to ameliorate this asymmetry (between emissions cuts and historical responsibility) could be in the order of hundred billions of U.S. dollars per year before mid-century.”

“Depending on definitions and approaches, climate finance flows to developing countries are estimated to range from $39-120 billion per year during the period 2009 to 2012.”