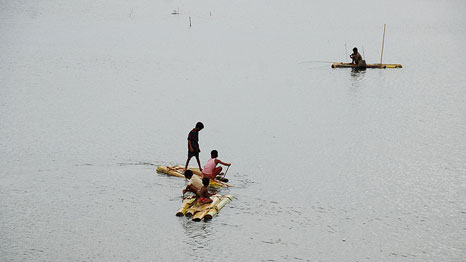 Flash flooding in Bangladesh, one of the world’s most vulnerable countries to climate change, in 2009 (Pic: Amir Jina/Flickr)

Rich countries’ fears they may be forced to compensate poor nations for the damage caused by climate change are unlikely to be realised over the next two years.

A UN committee met in Germany this week to discuss “loss and damage” and drew up a work plan to address the issue between now and 2016.

Loss and damage is a relatively new strand of the international climate talks. Developing countries have demanded money to deal with the unavoidable impacts of climate change from richer nations.

Developed countries such as the US, which have been responsible for the majority of global warming, resisted. They feared the new arrangement would lead to them being blamed for these damages, and consequently receive a hefty bill for cleaning them up.

At last year’s UN conference in Warsaw, negotiators for the first time agreed to consider a compensation package.

But under the work plan, financial activity over the next two years will be limited to researching and providing information on the financial tools that could be used to tackle climate damage.

“As of now it’s very unclear on whether this mechanism will be able to really help in delivering additional financial support for addressing loss and damage,” said Sven Harmeling, climate change advocacy coordinator at CARE.

“It’s a starting point but it could have been much stronger.”

The work of the committee was limited by the rules set out in Warsaw, when the mechanism was established, he said. But it could be developed further at the UN’s forthcoming conference in Lima, where the plan will need to be approved.

“There might be discussions about whether it can have its own financial facility,” he said.

The plan highlights catastrophe risk insurance, climate-themed bonds and catastrophe bonds as some of the financial instruments that could be used to deal with loss and damage.

Harmeling also highlighted some of the strengths of the work plan, including its focus on vulnerable sections of society, and how it deals with the damage caused by slow-onset events as well as sudden disasters.

This is particularly crucial to small island states, some of the most vigorous supporters of the mechanism, which are being slowly eroded by rising sea levels.

The committee says that a five-year working plan will be developed by 2016, to continue and implement work on loss and damage.