UN climate talks: what was decided in Warsaw?

An outline of the main agreements reached at the 2013 UN climate summit, and what they mean for future negotiations 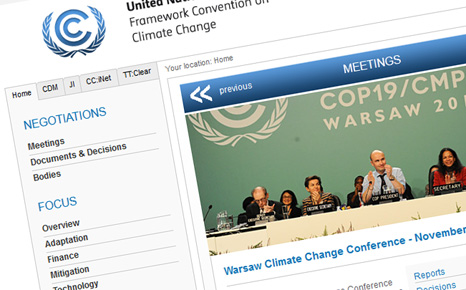 The UN’s 2015 Global Deal – The good news is a global emissions reduction deal in 2015 is still possible, but there needs to be an urgent injection of political and financial capital next year. It looked like it was going to collapse, until a giant huddle at 1430 on Saturday. Countries watered down the text, changing the word ‘commitment’ to ‘contributions, without prejudice to the legal nature’, while ‘those in a position’ to make commitments was changed to ‘those who are ready’. The can was kicked to March 2014, when envoys will meet in Bonn to start working out some real details.

Loss and damage – The ‘Warsaw International Mechanism for Loss and Damage’ has a grand title, but the foundations are yet to be established. Work will start on reporting to the UN on the costs and possible approaches to dealing with climate compensation next year. It will exist as part of the UN’s adaptation body until 2016, when a review will take place. Few left really happy, but further and perhaps tougher battles lie ahead. Its board will meet for the first time in March 2014.

Finance – Little ‘new’ finance was pledged in Warsaw. The EU said its new budget from 2014-2020 would direct 20% of all funds to climate-related projects. The UN’s Adaptation Fund received more money, while the UK pledged £125 million to the Least Developed Countries Fund and the BioCarbon Fund. Japan tried to deflect criticism for dumping its mitigation targets by increasing its funding to $16 billion. Much hinges on Ban Ki-moon’s climate summit to drive funding in 2014.

Green Climate Fund – Calls for ‘ambitious and timely’ contributions from developed countries by December 2014. Where that will come from still appears unclear. Leaders from Australia and Canada publically refused to support it at a meeting of the Commonwealth in Sri Lanka last week.

Adaptation fund – This received around $100m of new pledges in Warsaw. It is an important source of finance for developing countries who want to prepare for severe climate impacts.

Clean Development Mechanism – The UN’s flagship carbon trading mechanism has been in danger of being counted out by the referee for the past year. Prices of carbon units have collapsed, and a recovery looks – for the moment – unlikely. A concerted push to reform the CDM was blocked in Warsaw. The UN wants feedback on how to move it forward by May 2014.

Deforestation – This accounts for up to 20% of global emissions. A UN programme known as Reducing Emissions from Deforestation and Land Degradation (REDD+) has been developing over the past decade. It’s a scheme where developing countries are paid not to chop down trees. The rules, or technical substance, were adopted in Warsaw. $280 million was also pledged by the EU, USA, Norway, UK and Germany. According to UNEP officials it’s likely to be up and running by 2020.

Other decisions – These are the key documents and agreements we feel are important. There are many others – and you can find a full list in all its technical glory on the UNFCCC website.