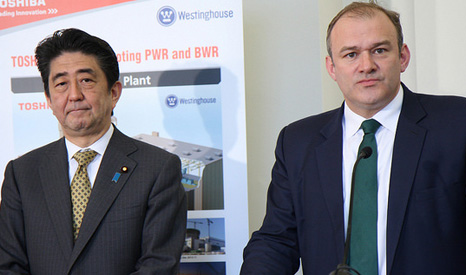 The UK is pressing Japan, Canada and Australia to accept tough carbon cuts ahead of a proposed UN climate deal in 2015.

Over the past year leaders in Tokyo, Ottawa and Canberra have backed away from accepting tougher greenhouse gas cuts – a situation the UK suggests is untenable.

UK energy secretary Ed Davey criticised these “regrettable examples of backsliding” at the report launch, which was held at the offices of insurance firm Aviva.

“We will work constructively with these countries to draw them back into step with the other major economies,” he said.

Asked if the backsliders should be penalised, Davey said: “There is so much politics in this… I don’t think you can punish countries; you want to encourage, reward and persuade them.

“When countries see they are behind the pack, they will get worried.”

The report adds: “We want to see them commit to ambitious targets to reduce their absolute emissions across their whole economy, to reflect their high level of past emissions, their likely future contribution to climate change, and their capability to deliver such cuts.”

Earlier this year the then UK climate minister, Greg Barker, laughed off an invitation from Australia and Canada – which have influential fossil fuel lobbies – to join a coalition against climate action.

Leading developed economies including the US and EU states should aim for “targets of between -34% and -74% on a 1990 baseline by 2030” say the authors.

The EU is currently working on plans to adopt a plan to cut emissions 40% on 1990 levels by 2030, but the US and other richer nations are currently well off that trajectory.

“If other countries come forward with ambitious commitments, the UK would argue for the EU to go further and move towards a 50% reduction, for example through use of international carbon markets,” they add.

Leading economies are expected to reveal their contributions to a global climate deal by Match 2015. These could include carbon cuts along with financial aid and technology transfer to poorer countries. 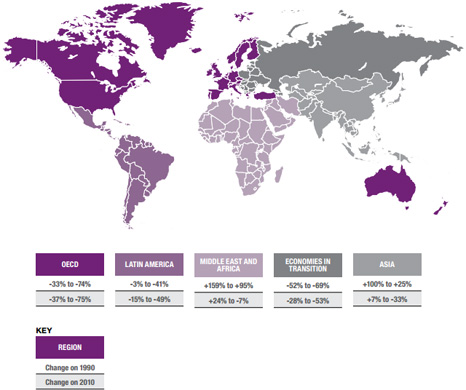 The report highlights the critical role China will play in ensuring the world does not warm more than 2C above pre-industrial levels, a ceiling agreed by governments and scientists.

“India has low per capita emissions and is rightly focused on development and growth. We therefore expect India’s emissions to grow in the near term,” the authors say.

“But it is the fourth largest emitter (after China, the US and the EU), and the earlier it can peak, around or shortly after 2030, the better.”

“The E7 group of emerging economies appears to have woken up to the business logic of green growth, decarbonising faster than the G7 for the first recorded time, and substantially so,” said PwC partner Leo Johnson.