A 35% energy efficiency target for 2030 would wipe out reliance on Russian gas, says UK think-tank IPPR 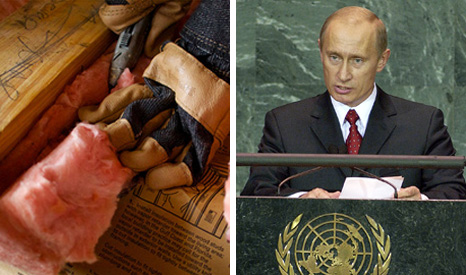 Europe should set an ambitious energy efficiency target to slash reliance on Russian gas, a think-tank has recommended.

A target to improve energy efficiency 35% by 2030 would cut EU dependence on gas by a third, IPPR said in a report. That is equivalent to the proportion of demand met by Russia.

The European Commission has proposed a 30% energy efficiency target as part of the 2030 climate and energy framework. The package, which also targets 40% emissions reduction and 27% renewable energy share, is to be finalised in October.

IPPR, a centre-left policy research group based in London, called on European leaders to crank up all three targets, with a particular focus on energy saving.

Joss Garman, IPPR associate fellow, said: “The crisis in Ukraine has reignited the debate in Europe over whether the package of energy policies that the continent’s leaders are aiming to agree in October should include a binding 2030 target on energy efficiency.

“This is because the countries that are most dependent on Russian gas are also the least fuel-efficient, and improvements in energy efficiency could vastly reduce the scale of our dependency on Russia.”

Out of 28 EU member states, 24 import gas from Russia, the report highlighted. Half of that flows through the Ukraine, which for the past five months has been a conflict zone.

The UN estimates 3,000 people have died in the violence between pro-Russian separatists and Ukrainian government forces.

The EU blames Russia for stoking the conflict – a charge the Kremlin denies – and is imposing sanctions on Russian energy producers.

Given that the bloc spends around €31 billion a year with Russia on gas imports alone, the energy sector is an important target for economic sanctions.

However, Brussels’ ability to penalise Russia through its energy sector is limited by its heavy reliance on the country for oil and gas supplies. Six member states count on Russia for all their gas.

The Ukraine crisis has boosted energy security up the European agenda. Proposals for an energy efficiency target formed part of that drive.

Garman said: “The European Commission did not initially propose a 2030 energy efficiency target, but at least seven European governments – including Germany but also crisis-hit countries such as Greece and Portugal – strongly favour setting one.

“It is both the cheapest means of cutting carbon output, and essential for improving European energy security.”

He said: “Recent events in Ukraine and the Middle East have served to highlight the vulnerability of our energy supplies and the political straitjacket that results from our over-dependence on fossil fuel imports from these volatile regions.

“The quickest and most effective form of energy security is to use less. EU leaders are currently discussing whether to mandate energy efficiency improvements of 30% by 2030; studies show that we can go to 40% without incurring economic penalties, and Ukraine shows that we must.

“Investing in energy efficiency and domestic sources of energy like wind, solar, wave and nuclear power will also improve the EU’s competitiveness with the US and China, and bring health benefits by reducing air pollution.”

In a separate report, the International Energy Agency (IEA) described energy efficiency as a “hidden fuel” that was “routinely and significantly undervalued”.

Under existing energy efficiency policies, two thirds of economically viable measures between now and 2035 will not happen, it said.

Bridging this gap will boost the global economy by US$18 trillion over that period, the IEA estimated. That is more than the combined annual output of the USA, Canada and Mexico.

Not everyone agrees an energy efficiency target is the way forward. The UK government, for one, has consistently pushed for a single 2030 carbon reduction target, with measures to strengthen the EU emissions trading scheme (ETS).

Its line is that the ETS will make sure carbon cuts are achieved at the lowest cost. Specific renewable and energy efficiency targets undermine that carbon price signal, the UK government argues.

Advocates for those low carbon sectors, on the contrary, say the carbon price is too low and volatile to base investment decisions on. Targets provide more long term certainty.

The UK should review its position in light of the Ukraine crisis, according to Garman: “Britain should overcome its aversion to an energy efficiency target as part of its broader response to Russian aggression.”

The IPPR also recommended increasing the 2030 carbon cutting target to 50% and the renewable energy target to 30%.

A tranche of pollution allowances under the ETS should be cancelled and the proposed “market stability reserve” brought in by 2016, the report said.

It rejected the “energy union” solutions proposed by Donald Tusk, the Polish prime minister and European Council president elect. Dealing with the security threat from Russia will be one of Tusk’s top priorities in his new role.

Tusk’s vision is built around fossil fuels: rehabilitating coal, which generates 90% of Poland’s electricity, and diversifying supplies of gas.

Europe’s strategy will also be shaped by the commissioners appointed to energy and climate change, due to be announced by Commission president Jean-Claude Juncker this week. A leaked organisation chart tipped Latvia’s Valdis Dombrovskis and UK representative Jonathan Hill for these portfolios.

IPPR said any increase in coal burning, the most carbon-intensive form of power generation, would be “completely inconsistent with any efforts to build a low carbon economy”.

What is more, Europe buys almost a third of its coal from Russia.

Developing new gas routes would be costly and do little to reduce exposure to price volatility, the report argued. The role of fracking new shale gas resources will be “marginal”.

Instead, the think-tank wants Europe to protect its first-mover advantage in green industries.

Europe’s 2030 package will be signed off too late to present at the Ban Ki-moon climate summit on 23 September, which Garman said was “frustrating”. The one-day meeting in New York is an opportunity for heads of state to pledge action on climate change.

However, it will be a vital input to the global climate deal set to be agreed in Paris next year.

The US and China are “making the running in global climate talks” and renewed leadership from Europe could make a positive outcome more likely, the report said.