With Ukraine and Afghanistan dominating this year’s Summit agenda, will NATO ever take climate change seriously? 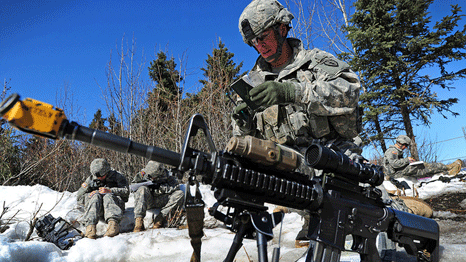 If there’s one place where climate change might still be considered trivial, it’s this year’s NATO summit.

With Russia’s provocation in Ukraine, the threat of ISIS and the end of NATO’s mission in Afghanistan weighing heavily on this year’s proceedings, the spotlight is unlikely to fall on climate change during the two day talks in Newport this week.

But the security implications of climate change – which degrades lands, increases competition for resources and turns vulnerable population into migrants – have long been clear, though largely ignored by this western defence coalition.

“There are the climate risks in Europe which NATO underplays, but they’re actually pretty important,” says Andrew Holland, senior fellow for energy and climate at the Washington-based American Security Project thinktank.

The profile of climate change within NATO discussions has remained low, even as scientists, politicians and militaries have been raising the alarm bells.

“Climate change poses another significant challenge for the United States and the world at large,” said the US Department of Defense in its 2014 Quadrennial Defense Review, warning that terrorism and violence could flourish in changing conditions.

“It hasn’t been addressed on the political level,” says Jeffrey Mazo, a climate and security specialist at the London-based International Institute for Strategic Studies.

“Given the whole range of priorities, with what’s going on in Ukraine, I suspect it’s not going to get a great deal of attention [at the 2014 summit].”

So far, NATO has no common position on climate and security, despite it being highlighted as a new security concept that has the “potential to significantly affect NATO planning and operations” in 2010.

A single line in the communique from the 2012 Chicago summit echoed this sentiment.

One reason for this oversight could be the fact that a common NATO position would require a consensus from all 28 alliance countries.

“They can’t really drive one policy agenda unless all the 28 nations agree, and this is something that never happened until now. I think this is the most important part, to get the 28 nations to go in one direction,” said Hartmut Behrend, a meteorologist for the German army and former NATO official.

Russia and the Arctic

Since climate change first came onto NATO’s radar, it has mainly been considered in the context of unrest in poorer countries most vulnerable to the effects of temperature rise.

But this may need reframing as the impacts of global warming start to touch the western world more directly.

In 2012, 15,000 US troops were called in to respond to Hurricane Sandy, while 2,000 UK servicemen helped with relief efforts with flooding in the south west earlier this year.

“Often, the only forces with the logistical capability to respond to these are the military, so I don’t think that NATO or the defence policy people within European governments have planned enough for this,” said Holland.

Meanwhile, the melting Arctic has exposed the potential for geopolitical tension, as new resources and shipping routes mean Arctic countries may be feistier in pursuing disputed territorial claims.

The fact that Russia has the greatest interests – and the largest military – in the Arctic makes it directly relevant to NATO today.

This week, president Vladimir Putin spoke about Russia’s determination to assert its presence in the icy north.

“Our interests are concentrated in the Arctic,” he told a youth camp outside Moscow, adding that Russia should “pay more attention” to the region and renew infrastructure in order to provide security for shipping.

This means that NATO’s handling of the new opportunities and potential disputes in the Arctic comes with some added baggage – the potential for aggravating Russia.

“If NATO chooses to be more confrontational towards Russia because of the Ukraine crisis, the Arctic is one place they could do it,” says Mazo.

But he adds that, conversely, the Ukraine crisis could see a brief period of respite for Arctic development.

Countries are more likely to want to maintain the current spirit of cooperation, which means stalling on difficult geopolitical claims until Russia’s relationship with the west has cooled off. A politically dangerous environment may make the Arctic’s riches appear rather less enticing to oil companies.

While climate change is unlikely to take centre stage at this particular summit, the increasingly clear threats mean that the implications of not addressing it soon are beginning to trickle though to NATO.

“At first, it was very hard for the military. All environmental subjects were far away because they were soft subjects,” said Behrend. “The military realises more and more how important these subjects are, but it takes a long time for the awareness to trickle through.”

Meanwhile, after the summit, NATO gets a new secretary general, Jens Stoltenberg. As former prime minister of Arctic state Norway and UN special envoy on climate change, he could guide NATO towards a firmer stance on the topic.

Earlier this year Stoltenberg told RTCC it was important to remind world leaders just how dangerous climate change could be.

And, adds Holland, what’s good for the planet could also be good for NATO.

“We can’t think just about the Russians to the east. We also have to think about NATO’s southern borders and what’s going on in North Africa, the Middle East, and a lot of that is wrapped into what’s happening and what’s going to happen with climate change,” says Holland.

“Climate change is one of the 21st century issues that could help reinvigorate NATO.”