Australia lacks gravitas to cast off climate talk, with US and China likely to put pressure on Tony Abbott 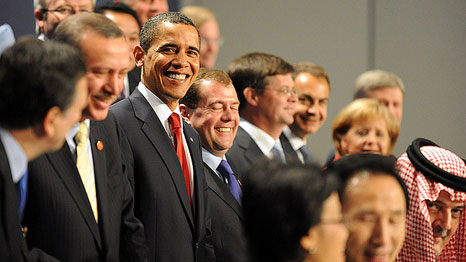 Climate change is likely to be discussed at the G20 summit in Brisbane, despite Australia’s decision to leave it off the agenda.

This is the finding of a new report, released this week by the centre-right think-tank Committee for Economic Development in Australia (CEDA).

Australia lacks the diplomatic weight to dismiss the issue while heavyweights such as China and the US are ramping up their own efforts to combat carbon pollution, say the authors.

“As a middle-power economy, Australia’s leadership and influence may be limited,” writes Sarah-Jane Derby, senior economist at CEDA, in the report.

“For example, members may be receptive to Australia introducing new ideas and changing the agenda, but without the support of players who are more powerful, these ideas may not be taken seriously.”

Australia prime minister Tony Abbott has faced heavy criticism from environmentalists over his decision to axe many of the country’s flagship climate policies, such as the tax on carbon.

Reports from Australia suggest he knocked climate change off the G20 agenda as it did not fit with the summit’s focus on economic growth.

”It’s also important to ensure that these international meetings don’t cover all subjects and illuminate none,” he said, suggesting that there were more appropriate international forums for the topic to be discussed.

The UN meets annually to work towards a solution on climate change, but the G20 provides opportunities for “open discussions” between the world’s major economic players that are not possible during international meetings, says the report.

It adds that the tight economic focus of the Brisbane summit could add value to climate change discussions, by considering the financial risks and consequences of heating the planet.

“The information gained from the G20 discussions would not be without value, as it would help to inform global policy development, adding its members’ political weight to climate action negotiations that may be happening at other forums,” the authors write.

In June, the US ambassador to Australia said that Obama planned on raising climate change during the leaders’ summit and at “every international forum”, as it was a critical issue “not only to Americans but to the world”.

While the US and China still clash over the broad nature of a proposed 2015 UN climate deal, both are intensifying domestic efforts to cut carbon emissions. The Australian government has been accused of going backwards, having repealed the carbon tax and abolished the Climate Commission.

CEDA chief Professor Stephen Martin said: “As the host of the G20 Brisbane Summit, Australia has a unique opportunity, in fact a duty, to make sure that the forum is more than a ‘talkfest’, and that key issues with significance for both our own economy and globally are tackled effectively.”