Politicians must take on transport “taboos” to curb emissions 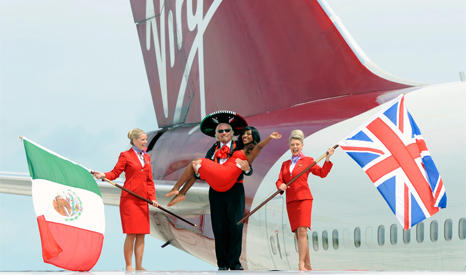 Airlines like Virgin are proud of their green credentials, but are also expanding rapidly (Pic: Virgin Airlines)

Sustainable transport policies will fail unless “taboos” around air and car travel are broken, researchers have warned.

Policymakers need to take on the high-flying elite who are responsible for most transport emissions, according to the study.

“Ironically they are offered rewards for this behaviour with air miles, as well as earning prestige among peers who view international travel as a status symbol.

“Our research explores how these transport taboos are driving policies that are contradictory to carbon emission targets.”

Transport accounts for nearly a third of greenhouse gas emissions in the EU and demand is rising.

Globally, the International Energy Agency expects the number of passenger cars to double by 2035 and air travel to triple by 2050.

Even with improvements in the energy efficiency of vehicles and use of biofuels, that is set to substantially increase transport’s share of emissions.

In the EU, the European Commission aims to cut transport emissions 20% by 2030, from 2008 levels. However, it says “curbing mobility is not an option”.

This is at odds with other studies showing use of energy-intensive forms of transport must be curbed to achieve absolute emissions cuts, the report notes.

This means air travel, which is the least taxed and most subsidised form of transport. Low-cost airline Ryanair is estimated to have received subsidies worth €800 million in a single year.

Kevin Anderson: “The fox is having to protect the chickens”

Cohen blamed the influence of the transport lobby.

“Politicians continue to ignore evidence of what works in favour of optimistic headlines about technological innovation, driven by industry and lobbyists,” said Cohen.

“There is a lot of exaggeration surrounding ‘wonder’ technologies that promise to reduce carbon levels while allowing privileged sections of society to continue to travel without limits. These optimistic claims are largely undebated in political circles, as this would force politicians to face some harsh truths.”

Indeed, politicians tend to belong to the elite group of frequent flyers who are not willing to travel less.

And when the EU has attempted to act, it has been slowed down by international opposition.

Attempts to put a price on carbon emissions from long-haul flights have been put on hold after countries including the US, China and India kicked up a fuss.