US-Australia “meeting of minds” on climate – US official

US and Australian government saw convergence on climate during annual meeting, despite polarised domestic policies 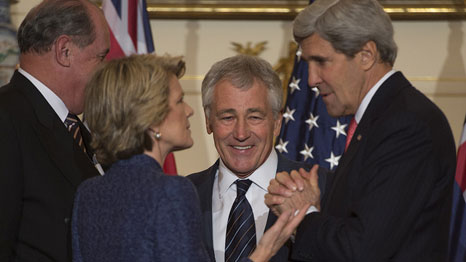 A gathering of US and Australian ministers proved a “meeting of minds” on the topic of climate change, according to a senior US State Department official.

Daniel Russel, assistant secretary for the Asia-Pacific Region, said that both teams agreed on the “significance of the challenge” when they met this week in Sydney, Australia.

”The conversation was predicated on the reality of global warming,” he said, according to a report in the Sydney Morning Herald. ”It was not a theological debate. It was an information exchange.”

His comments may come as a surprise considering the diverging approaches to climate policy in the two countries.

During his second term, US president Barack Obama has pushed through a raft of climate policies, including pollution curbs on coal-fired power plants.

Abbott’s chief business advisor Maurice Newman warned in the Australian newspaper today that the world was unprepared for “global cooling”, in a direct challenge to the bulk of evidence that shows the planet is heating up. Scientists said this was like saying “we aren’t prepared for an alien invasion”.

In a communique released after the meeting, the US and Australian governments said they recognised the “challenges climate change poses to security”. They will both work towards a “new, ambitious climate agreement” that the UN hopes to get signed off in Paris in December 2015.

The meeting was attended by US state secretary John Kerry and US defense secretary Chuck Hagel, alongside their Australian counterparts.

The meeting came as Australia’s environment minister admitted climate change was damaging one of the country’s greatest natural icons.

This week, a government report warned the Great Barrier Reef, is in a “poor” condition that is expected to decline, due to pressures from climate change.

The agency responsible for the health of the reef said acidification and warmer waters, both impacts of warming caused by CO2 emissions, could restrict coral growth and cause them to bleach.

A huge coalmine recently approved by Greg Hunt, Australia’s environment minister, could further damage the fragile environment, as transporting the coal to India will require five million tonnes of seabed to be dredged and dumped in the reef’s marine park.

Following the report, Hunt acknowledged for the first time that the reef had dark times on its horizon.

He told ABC: “The basic position I think is this; that what you see when you read the reports today is a mixture of pressure and progress, and the pressure is real. I don’t think we should understate that.”