Obama cranks up pressure on critics with latest climate play 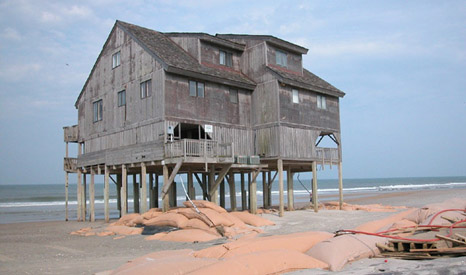 The costs of inaction on climate change are likely to rise significantly says the White House (Pic: Soil Science.info/Flickr)

By John Upton in Los Angeles

As hearings began on Tuesday morning into proposed greenhouse gas rules affecting American power plants, President Barack Obama got an early jump on his critics with the release of an economic report linking further delays to climate action with spiraling costs and financial damages.

The American Chamber of Commerce and other big-business groups representing fossil fuel companies say the rules, which would primarily curb pollution from the nation’s vast fleet of coal-burning power plants, would hinder the economy by raising electricity costs.

Environmentalists counter that energy efficiency gains under the new rules, combined with a potential jolt to the fast-growing renewable energy sector, could lead to economic as well as climate benefits.

But as these groups were pleading their cases Tuesday during the first of four planned public hearings hosted by the U.S. Environmental Protection Agency, each of which has already “sold out,” it was the Obama Administration that was controlling the news.

In addition to releasing a new report by the White House Council of Economic Advisers, the White House made separate announcements Tuesday regarding fresh efforts to reduce climate-changing methane emissions and to use big data to help farmers adapt to climate change.

Meanwhile, high-profile White House advisor John Podesta, a strong advocate of climate action, is leading the US delegation at the Pacific Islands Forum this week.

And State Secretary John Kerry discussed climate change risks and clean energy during a speech about Indian and U.S. relations at the Centre of American Progress think tank on Monday.

The new White House report concludes that the cost of “hitting a specific climate target,” such as limiting carbon dioxide concentrations, would increase 40% for every decade that efforts to curb carbon emissions are delayed.

It also points to research that concludes that allowing global temperatures to rise by 3 degrees C, instead of the global goal of 2 C, would worsen economic damages by 0.9% of global output. In the U.S., the report notes that would have translated into a $150 billion hit in 2014.

“These costs will take the form of either greater damages from climate change or higher costs associated with implementing more rapid reductions in greenhouse gas emissions,” the 32-page report states. “In practice, delay could result in both types of costs.”

Tuesday’s announcements and report were fresh signs that Obama’s Democratic Party remains confident that acting to slow and adapt to climate change has become a winning electoral strategy.

Obama, who is serving his second and final four-year term, began a climate protection blitz a little more than a year ago, when he announced a 75-goal climate action plan.

The blitz has included rolling out new regulations, publishing scientific reports, and making speeches that extol the environmental and economic benefits of slowing warming.

The president has recently been lambasting Republican energy policies during speeches, accusing his political opponents of pretending to not be able to read scientific reports.

Those attacks have been part of a broader effort by the Democrats to use climate change as a political wedge issue, isolating Republicans from the majority of the American electorate.

Although Americans overall remain more apathetic about climate change than residents of other countries, polls have consistently shown that most Americans support the proposed new power plant rules.

Meanwhile, Republicans, with some high-profile exceptions, have been backing away from former positions of flat-out climate change denialism.

But they have been struggling to consistently articulate a fresh position on climate change. Some former climate change deniers have taken to deflecting questions about global warming by saying they’re not academically qualified to discuss climate science.

The schism between the parties on climate change is widening as the U.S., one of the world’s worst greenhouse gas polluters, and long a thorn in the side of global efforts to slow down global warming, prepares for elections that could shape the fate of international climate agreements.

Elections in November will reshape Congress, which, under the current control of the conservative Republican Party, would never be expected to ratify an international climate treaty that’s expected to be finalized in Paris late next year.

The Republican-controlled Congress has refused to pass laws that address climate change, forcing Obama to craft a climate strategy that leverages the Clean Air Act and other existing laws.

Meanwhile, the nation will elect a new president in late 2016 – a leader who is likely to oversee early American efforts to meet the nation’s obligations under next year’s climate treaty.

“There’s a marked shift in the way climate change is being perceived by the American public and by the political classes,” David Doniger, the policy director at the Natural Resources Defense Council, a science-based group that helped the federal government craft its proposed power plant rules, told RTCC.

“I don’t think a climate denier can be elected president, and that’s a quandary for the Republican Party,” Doniger said.

“It creates a big challenge for someone in the Republican Party, who might do well in the primaries, but who is basically alienating themselves from the center of the electorate.”