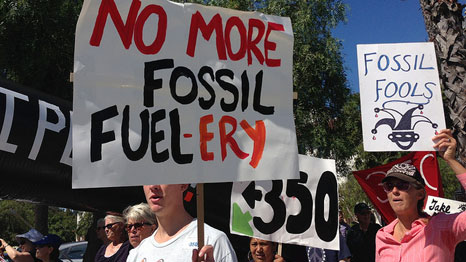 Plans are in motion for climate marches in Turkey, France, Bulgaria, Guyana, Brazil, Burundi and others, ahead of Ban Ki-moon’s climate summit this September.

The original People’s Climate March, which will roll through New York as world leaders gather for the landmark conference, has swollen into a global movement, with over 30 events now scheduled to take place across six continents.

Activists group 350.org, which is spearheading the action, has said it will be the largest climate action to date.

UN Secretary General Ban Ki-moon is hosting the event alongside the UN General Assembly on 23 September to generate momentum ahead of an important international climate deal set to be signed in Paris 2015.

US President Barack Obama has said he will attend the summit, though leaders of some of the world’s largest economies have yet to confirm. Indian Prime Minister Modi appears likely to snub the event, while David Cameron’s presence remains uncertain.

Activists intend to use the event – and the momentary attention of the world’s media – to raise the volume around climate change, with around a million campaigners touted to descend upon New York on 21 September.

Actions planned include simultaneous climate marches in Rio de Janeiro, Seoul and Sydney – alongside a “silent climate parade” in the typically edgy Berlin.

Today, 350.org and its allies launched a website tracking the different movements and providing inspiration for organisers to launch further events.