Not all youths protest. Some have become part of official government delegations. What can they achieve? 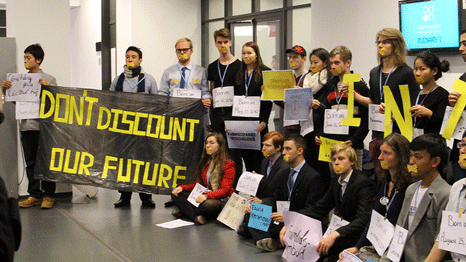 Even in the great labyrinth of Warsaw Stadium, the venue for the UN’s 2013 climate talks, the young people were never hard to spot.

Youth activists stalked the corridors wielding a giant toy dinosaur. They played ball with an inflatable planet earth, handed out chocolate bars in the foyer and harassed delegates while wearing post-apocalyptic costumes. 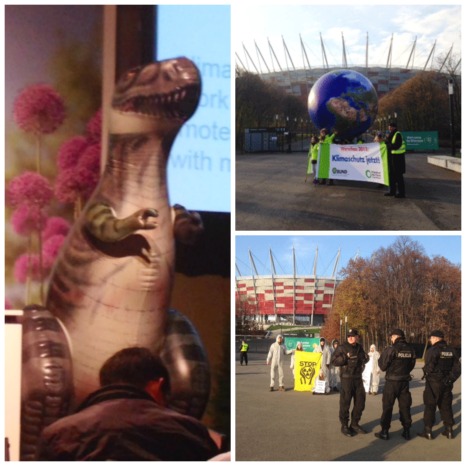 But behind the scenes, some of their quieter compatriots have taken a different approach in the fight for their future. They have got in with their governments, earned places on official party delegations, and hope to become the next batch of UN climate negotiators.

These are the young people who want to change the system from within.

“Passion is displayed differently across youth,” said Olivia Santiago, a 20-year-old student at Brown University, who works with the small island states delegation during negotiations.

“I’m very passionate about the work I’m doing even though I’m on the inside and show it in a different way, rather than being outwardly vocal and having signs and picketing and walking out.”

Young people who have managed to infiltrate the mysterious world of closed-door meetings say that they offer a unique perspective to the UN climate talks, which can revitalise the weary conversations of negotiators, some of whom have now been treading the same ground every year since 1992.

“I feel the perspective I bring is a breath of fresh air for some of these veterans who’ve been in it for a long time,” continues Olivia. “You just get a different perspective across different generations, and being a youth is definitely an advantage in negotiation rooms.”

The advantages of involving youth at party level has also been recognised by the UN, with a 2010 report highlighting how it could give young people a “more nuanced understanding of the negotiation dynamics”, which could be fed back to their activist counterparts to strengthen their own lobbying.

Smaller delegations from the developing world have even identified the lack of young people as a threat to the longevity of their teams.

Concern over the lack of resources to coach young people in the complexity of the UN climate talks led the Alliance of Small Island States (AOSIS) bloc to establish an EU-funded climate fellowship training programme for future negotiators.

Lying just a few feet above sea level, the small islands states are one of the most vulnerable regions to climate change. They are already feeling the impacts of coastal erosion and salt water inundation as sea levels rise, and many face complete submersion unless serious action is taken to curb global warming.

According to Ili Vakacegu, a 26-year-old from Fiji who is enrolled on the programme, her grassroots knowledge as a young from the potentially doomed region means that she is able to articulate experiences with which her elders will not have had contact.

Rennier Gadabu, a 28-year-old from Nauru also enrolled on the programme, adds: “What we were dealing with 30 years ago is different to what we are dealing with today and tomorrow.”

Apart from these outreach efforts by AOSIS, the inclusion of young people on official party delegations remains an anomaly that both young people and the UN say needs to change.

In the UN climate body’s 2010 report on the participation of youth, they recommended that more young people are included on government delegations in an official capacity and that guidelines are established for their participation.

But it remains up to individual governments to take up this recommendation, and there is no centralised reporting system in place to monitor whether this has been achieved.

No guidelines have yet been issued, although the UN’s climate secretariat is currently conceptualising a joint document on how to involve youth in local, national and international decision making processes.

In addition, the UN General Assembly has issued a raft of resolutions on the need to increase youth access to official UN processes.

“I didn’t see any young people on the US, Chinese or EU delegation, and I would think these big countries should include youths on their delegation, but it’s not for me to decide,” said Olivia.

Those who do make it onto the delegations can have big impacts, but may find that some of the veterans of the process are less than grateful for their fresh perspectives.

Aisha Niyaz joined the Maldives government delegation as a one-off experiment in youth participation in 2011 at the UN talks in Durban, South Africa, when she was 26.

Her role as an insider meant that she was able to achieve what no protester had been able to achieve alone – embedding the importance of youth in the final outcome document of that year’s round of talks. The small size of the official Maldives delegation meant that there was no one available to track this, so Aisha decided to take on the mantle.

It was her inexperience which led to her success, said Aisha, as it meant she was willing to speak her mind rather than toeing the party line.

“Then she said that she was really happy that I brought it up.”

Aisha may have received a clap from some government delegates when youth was eventually included in the text, but others weren’t so impressed, with one negotiator accusing her of “naivety” and imposing an added burden on developing countries as a result.

An awkward moment. Then, “It’s good to be naïve,” said the Maldives minister, who had overheard the conversation.

Pictures from the Seychelles

But is an early start in the UN climate talks really just the fast-track process to creating a set of negotiators who are jaded before their time?

For young people – as with island nations – both the stakes and the passions are too high to contemplate any future disillusionment, says Olivia.

She holds up the example of Ronny Jumeau, the Seychelles ambassador who has been mentoring her at the talks.

“Ronny will go back and take pictures of beaches, and look at pictures of Seychelles every single day just to remind himself of home and what he’s fighting for.

“I think people my age, as we progress and become the leaders of the UN, as long as we do the same and hold onto our perspective, we’ll remember why we’re fighting for all of this.”