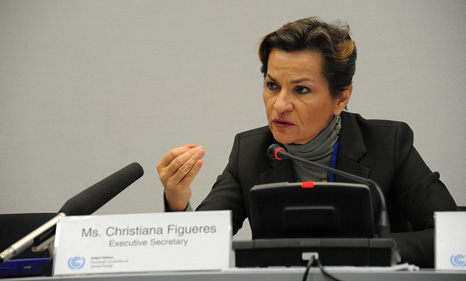 “Heaven knows we need never be ashamed of our tears, for they are rain upon the blinding dust of earth, overlying our hard hearts.” – Charles Dickens, Great Expectations

Nobody could accuse Christiana Figueres of being hard-hearted. Her passion for tackling climate change has many times spilled over into tears.

Yet as UN climate chief, she must be hard-headed. Her reputation hinges on striking a deal between nearly 200 parties with vastly divergent interests and priorities.

And as a woman, she tells RTCC of her determination to put gender equality at the heart of efforts to tackle climate change.

The core task of UN climate talks is to agree a plan to cut the greenhouse gas emissions heating up the planet. The deadline is December 2015, when negotiators meet in Paris.

These cuts must be deep to limit global temperature rises to 2C, the politically agreed “safe” threshold.

That will involve a huge shift away from polluting sources of energy to cleaner alternatives, reshaping the economy.

It is a wrench for some countries that have grown wealthy on the back of dirty fuel. And it is a challenge to those poorer nations tempted to follow the high-carbon path to prosperity.

At stake is nothing less than the economic trajectories of every country in the world, making it perhaps the most fraught political process in history. Every word of every document is subject to minute scrutiny.

Figueres took up the challenge in 2010, after talks in Copenhagen ended in failure. At a time when many people were questioning the value of the whole process, she had a lot to prove.

With so many conflicting positions, reaching agreement is always a challenge. The Durban talks in 2011 came close to collapse before a last-minute deal was struck.

If Paris is to be a success, Figueres must praise the ambitious, spur on the stragglers and keep minds focused on the goal.

In heading for that goal, there needs to be a move away from the “explicit male focus” of policy, she says.

“It is critical that that new economy not only re-establish the relationship between man and nature, which has been thoroughly not respected, but it also re-establishes the balance that is needed between the genders.”

Women make up half the population but are under-represented in the world’s major political and economic institutions; the UN is no different.

All eight secretaries general of the UN since its inception have been male.

At the last count, on the high-level committees delivering climate action fewer than one in four seats were held by women.

Just 29% of the 5,090 delegates at the Doha conference in 2012 were female. That figure includes junior officials; among lead negotiators the proportion is lower.

“I don’t think I am the only woman who is very acutely aware, every time I walk into a room, how many men and how many women are sitting round the table,” says Figueres.

“More often than not, we are in a minority. Quite often, I am the only woman in the room. That is not right.”

Parties to the talks adopted a goal of gender balance in 2012 and the UN monitors the data.

Within Figueres’ department, there is a “preference” to appoint a woman in cases where there are two equally qualified candidates.

“I would not call it affirmative action,” she says.

“I am Miss Impatient,” Figueres says. “I honestly don’t know of any institution that has already been able to effectively meet the challenge.

“No, we are not making enough progress, but does that mean we give up? We just work harder.”

She believes that women can bring a different quality to the talks that helps with reaching agreement.

“What I think is not exclusive to women but perhaps more common among women is our sense of inclusiveness, our sense of awareness of all the different points of view that must be expressed. I often find myself aware, not just of what has been contributed but what has not been said.”

Her desire to include all voices has not always been successful, as when NGOs walked out of 2013’s Warsaw summit in protest at the slow progress – not helped by a hefty coal lobby presence in a parallel conference.

Asked about her role models, Figueres quickly changes the subject. “I was blessed with both male and female role models and I think that is probably a very healthy balance. More important is: what would I like to see with respect to the next generation?”

It does not take a great leap of imagination to deduce who some of those role models might be, however.

The Costa Rican is member of a powerful political dynasty.

Her father, José Figueres Ferrer, served three terms as Costa Rica’s president. Her mother, Karen Olsen Beck, did stints as Costa Rican ambassador to Israel and on the legislative assembly.

Her older brother José Maria followed in his father’s footsteps to become Costa Rican president from 1994 to 1998. Her half-sister Muni is Costa Rica’s serving ambassador to the US.

Whatever advantage she may have gained from being born into such a heavy-hitting family, Figueres is keen to pass it on to others.

“Despite the fact I have a job that keeps me a little bit busy,” she says, with understatement, “I do take time to mentor young women, in particular, who are coming up…

“It is very important that my generation be the last generation that has this imbalance.”

Figueres often cites the next generation in general and her two grown-up daughters in particular as her inspiration for taking on her mammoth diplomatic task.

Taking two weeks leave to enjoy time with at least one daughter. Happy mother! You will not hear much from me over next 14 days.

On several occasions, she has shed tears at the enormity of the problem.

She cried in 2010 as she told youth campaigners how they inspired her. She wept in 2011 as she addressed faith groups in Durban. And she was visibly emotional in 2013 as she reflected on “unfair and immoral the impact of climate change on future generations at Chatham House in London.

It is rare to see a male leader display such vulnerability in public, although not unheard of – Figueres’ predecessor Yvo de Boer broke down after an exhausting round of talks in Bali proved fruitless.

A woman choking up risks being labelled weak or manipulative, as Hillary Clinton has found on a couple of occasions.

One climate sceptic blogger snidely remarked Figueres “should consider a career in the movies” for her tearful speech.

To the less cynical observer, Figueres shows an empathy for the victims of global warming that is all too easily lost among the wonkish jargon and abstract concepts of climate talks.

She has argued that as women bear the brunt of climate change, particularly in the developing world, they are uniquely placed to do something about it.

Her UN body highlights climate-friendly initiatives in which women take the lead.

These include training women in Ghana to make and sell bikes made from bamboo, a sustainable material; planting trees and building energy efficient brick stoves in Guatemala; and Australia’s 1 Million Women campaign to cut energy consumption.

While you can’t fault the intentions behind these projects, their impact pales into insignificance besides the investments made by fossil fuel companies, financial institutions and governments.

With a few honorable exceptions – German chancellor Angela Merkel, Brazilian president Dilma Rousseff and Christine Lagarde of the IMF spring to mind  – the leaders of these economic powers are male.

As one Grist blogger puts it: “Figueres focuses on minor personal changes, conveniently setting aside the fact that the people with the power to make major environmental decisions are overwhelmingly male.”

Given the small scale of these efforts, how can they make a difference? Figueres says: “We have initiatives in women for results that are both small and large scale.

“The ones that are at small scale, we are very fond of because we see the possibility for nurturing them into larger scale. What we are very intent on is how we can support these initiatives to grow in scale – both in recognition and impact.”

For example Bernice Dapaah, founder of the bamboo bikes business, was named a 2014 Young Global Leader by the World Economic Forum.

And Figueres says the bikes have been so in demand Dapaah is hiring more women.

Meanwhile, more than 100,000 women have already signed up to the Australian campaign, making it the country’s largest women’s organisation.

Every little helps. But the true test of Figueres’ leadership comes next year, in Paris, when the world must agree an effective climate treaty.

Many rounds have talks have broken down, to the frustration and disappointment of delegates.

Will Paris, too, end in tears? With Figueres at the helm, there is a fair chance of waterworks. But there is every hope for tears of joy at a job well done.