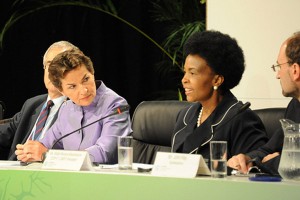 The UN climate talks in Durban have been hailed an ‘historic success’ after an agreement was reached on Sunday morning.

The deal should mean that a new global legally binding treaty to lower carbon emissions should come into effect in 2020, although the fine details are still unclear.

COP17 looked in trouble just before 2am, after India and China protested at the lack of equity in proposals put forward by the European Union (EU).

But a dramatic 15-minute ‘huddle’ in the centre of the plenary hall resulted in a form of words all parties could agree on.

COP17 President Mashabane called the agreement: “truly historical”, adding “You were prepared to show the required political will to move this process forward. It is without any doubt in my mind that we have worked together to save tomorrow, today”.

Parties have signed up to an EU-sponsored roadmap that will see a new variant of the Kyoto Protocol negotiated by 2015, and come into force by 2020. A second commitment period of the Kyoto Protocol, which does not include the US, China or India, will be finalised at COP18, in Qatar.

Talks on this new, more-inclusive document, which must have “legal force”, will get underway in 2013.

The roadmap was further developed by the EU, the Alliance of Small Island States (AOSIS) and the Least Developed Countries bloc (LDCs).

The Green Climate Fund has also been approved, although sources of funding are unclear, and states such as Bolivia appeared to reject the idea the private sector and carbon markets could be used to source finance.

The Durban talks were the longest in history, running almost 36 hours longer than the original cut-off point on Friday afternoon.

And at 0140 local time, COP17 looked close to collapse after an impassioned plea from India’s Jayanthi Natarajan, who accused the EU bloc of ignoring ‘equity’ in the text.

With the belief growing in the BASIC bloc that the EU timetable was overly legalistic and too tight, she directed her anger at COP17 President Mashabane, declaring “India will not be intimidated”.

Natarajan was backed by lead Chinese negotiator Xie Zhenhua, who delivered an angry rebuke to parties who he said had not fulfilled their current commitments.

“Look not what is said but what is done,” Zhenhua shouted, “We have been talking about this issue for the past 20 years. We are doing things you are not”.

But with support for a deal growing around the room, together with an intervention from US negotiator Todd Stern, Mashabane decided to call an impromtu ‘huddle’ for the main parties to come to a solution.

On agreement of the roadmap, the rest of the package was agreed with bewildering speed, Mashabane banging the gavel at regular intervals to speed the meeting along.

A framework for the Green Climate Fund – which could generate finances of $100 Billion a year by 2020 for developing countries – was adopted, although a venue for its Headquarters is as yet unclear.

There also appears to have been progress on REDD+ and deforestation measures.

Speaking to RTCC in the Plenary Hall, the UK’s lead climate diplomat John Ashton said the talks had been a success, adding the roadmap and accompanying measures “represented closure” after Copenhagen.

Adrian Macey, Chair of AWG-KP, the track of the talks dealing with Kyoto said: “We’ve got a package with clarity on the Kyoto Protocol, and importantly we also have clarity on the long term too, and it’s quite momentus I think looking at this longer term agreement. Better than people expected.”

Norway’s Climate Change Minister Erik Solheim told RTCC they were “very, very pleased, it’s in the upper range of what we hoped for. We’re pleased both with the substantive outcome and also the agreement on this process.

“For us this is a great outcome. The key aspect is that it is crucial, when you have a Kyoto Protocol with limited scope…[it’s] crucial we get a legally binding framework for all major emitters and that’s the core here. It’s also important the deadline for the negotiation process is not too far into the future. So it’s the ambition level and also the urgency. We have somethig to take climate action forward and we now have an ambitious pathway to go forward,” said Solheim.

“It’s been a long two weeks and also the months leading up. Very tough for all parties,” he added.

“Blockers lead by the US have succeeded in inserting a vital get-out clause that could easily prevent the next big climate deal being legally binding,” said Kumi Naidoo, Greenpeace International Executive Director.

“If that loophole is exploited it could be a disaster. And the deal is due to be implemented ‘from 2020’ leaving almost no room for increasing the depth of carbon cuts in this decade when scientists say we need emissions to peak.”