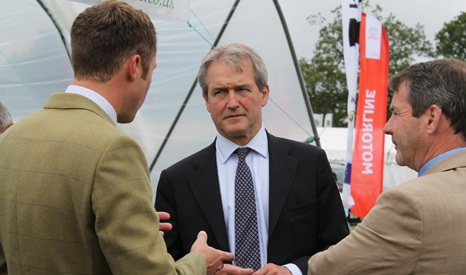 Paterson, who was sacked from government in this week’s ministerial reshuffle, will give the Global Warming Policy Foundation (GWPF) annual lecture on 15 October.

During his spell as environment secretary, Paterson played down the threat of climate change and said there could be benefits to a warming world.

Paterson is “one of the big thinkers about environmental issues and climate adaptation and shale gas,” Benny Peiser, director of the GWPF, told RTCC.

“We just thought that, given his background and given he has been environment secretary for the last year and heavily involved with a lot of these issues, these are issues that are really crucial to policymakers and the wider public.”

Peiser added: “He has been involved in a lot of discussions about shale gas development in Europe.”

There were calls for Paterson’s resignation earlier this year, as his department dealt with serious flooding. Labour and green groups said his climate scepticism was blinding Paterson to the increasing risk of flooding.

While prime minister David Cameron made a link between climate change and the floods, Paterson was silent on the subject.

Last week, it emerged Paterson had avoided briefings on climate science from the Met Office and other leading scientist.

However, he voted in favour of the Climate Change Bill in 2008, which introduced a legally binding cap on UK emissions. Only three MPs voted against.

The GWPF is a group co-founded by former chancellor Lord Lawson, with a track record of opposing action on climate change. Its website states that the group is “open-minded” on climate science but “deeply concerned about the costs and other implications of many of the policies currently being advocated”.

Previously a registered charity, the GWPF has been forced to restructure after the Charity Commission ruled its main purpose was political.

It will relaunch in September as two separately funded organisations: a political arm and a charitable education arm.