Petersberg Climate Dialogue in Berlin ends on positive note, as Hendricks says world is on track to sign deal 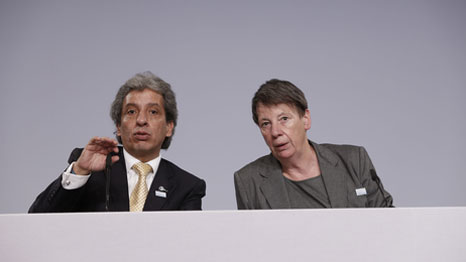 The world is on track to sign off an international deal on climate change next year, according German environment minister Barbara Hendricks.

Hendricks was speaking at the conclusion of the Petersberg Climate Dialogue in Berlin today, following a two-day meeting of high-level participants who will be instrumental in shaping next year’s UN climate agreement.

“At the Petersberg Climate Dialogue it became clear that we are on the right track and that ideas about the 2015 agreement are converging,” she said.

“However, there are still different opinions on the agreement’s internationally binding character, the degree of regulation and its level of ambition.”

She added that a UN conference taking place in Lima this December would be key to resolving these issues, and that she was confident that all countries would “act responsibly”.

A document released this month by the co-chairs of the UN climate talks, Artur Runge-Metzger and Kishnan Kumarsingh, who were also both in Berlin, set out the options for the UN deal, but highlighted that many conflicts still need to be overcome.

At recent sessions of the UN climate talks, the focus has been on countries’ contributions to the new deal, which could potentially include pledges on emissions reductions, adaptation and finance.

At the UN’s November conference in Warsaw, it was decided that countries who are “ready” should provide this information by March 2015 at the latest.

Hendricks said she was confident that major emitters, including the US, EU and China, would observe this deadline, allowing smaller countries to follow in their footsteps.

Peruvian environment minister Manuel Pulgar Vidal, who co-chaired the Petersberg Dialogue, and who will be president of the conference in Lima, said that the December meeting should deliver a draft text of the future agreement, as well as decide on a “practical and collaborative decision” on how countries plan to contribute.