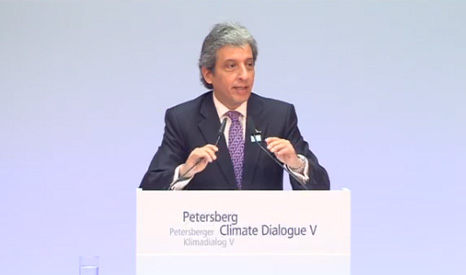 UN climate negotiators are on track to deliver the framework for an international emissions reduction deal by December, according to Peru’s environment minister.

Manuel Pulgar-Vidal, who will chair the UN’s 2014 climate summit in Lima later this year, said he has received “good signals” that a draft text will be ready later this year.

“We have received a good signals and strong political support,” he told delegates at the Petersberg Climate Dialogue, an annual meeting of environment ministers in Berlin hosted by the German government.

“Our main goal is to have a strong focus and draft agreement, it’s the only way to move towards a strong COP [Conference of the Parties] in Paris,” he added.

Paris is the 2015 venue for countries to sign off a global agreement to limit warming to below 2C above pre-industrial levels, a ceiling deemed safe by some scientists and politicians.

Last week the two UN officials tasked with guiding negotiations presented a rough outline of what the draft text could look like.

The Dialogue, which brings together ministers from developed and developing countries, is often seen as a useful barometer on the state of international climate talks.

This year’s meeting has an added urgency given the tight timelines negotiators are working against.

Major economies are expected to deliver their emission reduction and financial contributions to a global deal by the first quarter of next year, although it is still unclear what form these ‘Intended Nationally Determined Contributions’ (INDCs) will take.

Also speaking at the meeting, Germany’s environment minister Barbara Hendricks said the prospect of an international deal should be seen as an economic opportunity rather than a cost.

“Climate action and jobs in the field of renewable energy have been the stabilising factors that helped Germany progress though the financial crisis relatively smoothly,” she said.

“We have to stop the Mikado game that has so long shaped the negotiating process.”