Will India’s new PM Modi be a climate change champion?

If India’s new BJP leader puts India on the path of sustainable development, he could help save the planet 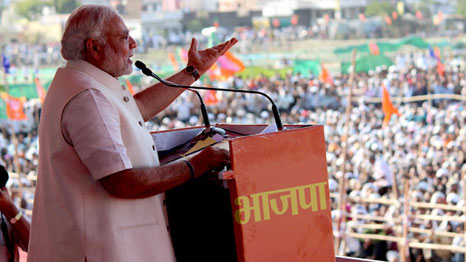 This makes Narendra Modi, the dynamic chief of India’s now ruling BJP party, one of the most powerful players in fight against climate change.

Dubbed the “Development Man” during his mammoth election campaign, Modi pushed a vision of prosperity to India: more power, electrified cities, and wealthier citizens. How he chooses to deliver on such a promise has profound implications for the planet over years to come.

A country’s ability to develop largely depends on its energy supply. In the BJP’s election manifesto, its slogan concerning energy is “Generate More, Use Rationally, Waste Less”.

Whether he depends on fossil fuels or renewables to top up electricity supplies in India – a country where around a third of people are still not connected to the national grid – could determine the planet’s chance staying within safe limits of global warming.

“The question is what won’t they do as much as what will they do,” says Nitin Pandit, managing director of World Resources Institute India, one of many observers eager to see if Modi will, for example, move India away from polluting coal as a primary energy source.

But as Modi seeks to push a ferocious agenda of national development, he may find it difficult to reject development proposals that looks “wonderful on paper”, says Pandit, even if it doesn’t strictly adhere to his manifesto pledge to “put sustainability at the centre of our thoughts and actions” – a suitably vague notion that has left experts pondering how much they can expect from India’s new leader.

Delve deeper into the BJP manifesto, and Modi’s climate policies remain mysterious. The focus is not how, but how much energy they are going to be able to produce.

Following in the footsteps of the US, India looks ready to adopt an “all of the above” strategy when it comes to energy: the manifesto promises to “maximize the potential of oil, gas, hydel power, ocean, wind, coal and nuclear”. This includes exploring for and producing more coal, at the same time as advancing India’s solar mission. 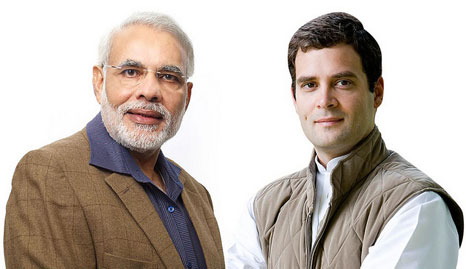 A diverse supply of energy is not without benefits – it creates security of energy supply, and decreases vulnerability to changeable markets – but, says Pandit, “I don’t think the thinking is about diversity per se. It is just being about being able to get more supply, no matter which way.”

Some are optimistic that Modi and his pro-business attitude mean that he will be a force for good in pushing India’s rapidly developing renewables market.

“Modi absolutely believes, and he has publicly stated many times, that he wants to embrace the clean energy model,” says Krishnan Pallassana, executive director of The Climate Group India. “With Modi as prime minister we expect there will be a huge boost to this sector, because he not only talks, he also walks the walk.”

Congress, he adds, whom Modi beat in a landslide victory, had good intentions, but their more “welfare-centric, subsidy-centric” approach failed to deliver the promised results.

An agenda centred around development could indeed be a boon for the planet, if the government succeeds in linking this up to a complementary climate agenda.

While the economy and anti-corruption measures have provided the rallying cry of this election, when the fever has died down, these are the sort of links that the new government could start to make, according to Suruchi Bhadwal, Associate Director of Earth Science and Climate Change at the Energy and Resources Institute in India.

“It may not draw immediate attention, but maybe in a year or two may tap into adaptation mitigation,” she says. And there are parts of the “Modi intelligentsia” who are already beginning to make the link, adds Pandit.

The presidential-style candidate, dominated by Modi’s own dynamism, has also added to hopes that he stands ready to take advantage of renewable energy opportunities if they will spur further development in India. “Given the personality of the person, if there are opportunities to tap into in any area, I think he’s the kind of person who will jump into it hands on,” says Bhadwal.

Modi’s stint as chief minister in the Indian state of Gujarat provides something of a backstory to what can be expected from him now that he has the whole of India in his hands.

Under his governance, Gujarat became India’s leader in solar energy, pre-empting the national government by releasing its own solar policy in 2009, a year before the Jawaharlal Nehru National Solar Mission was issued.

Of the 1000+ MW installed in the country over the period 2010-2012, over 70% of this belonged to Gujarat. Modi also launched Asia’s first ever government department dedicated to climate change, and even followed in the footsteps of Al Gore, becoming the second politician to pen a book on global warming.

But from thereon, the tale loses some of its glory. Local reports from last year suggest that the climate change department has all but collapsed, and as other states have caught up on Gujarat’s solar revolution, its share of India’s total solar capacity has fallen to around 40%.

This has raised some doubts about his ability to replicate his success in one state across all 29. “I feel there are quite some challenges for him, but he may succeed in some parts. Not all states are at the same level of development, and there are very different institutional capacities across the country,” comments Bhadwal.

Modi will also have to familiarise himself with the international politics of climate change – his tenure will overlap with the UN’s attempt in 2015 to sign of a global, legally binding climate deal.

India’s stance at the talks so far has been less than conciliatory, with many issues still remained to be smoothed out between them and other big emitters such as the EU and US. 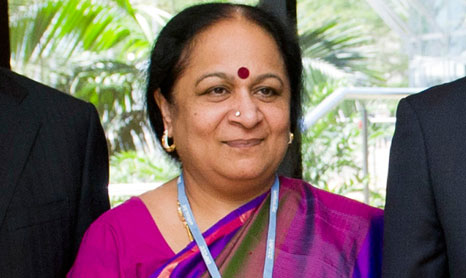 The outspoken party is unlikely to change this approach any time soon, and while adaptation is likely to remain a priority, it is unlikely they are going to be pressured into taking on mitigation actions equal to those of developed countries any time soon.

“I don’t see why they would feel the need to suddenly start accepting international demands on what must happen to the climate,” says Pandit.

“The belief there is the largest per capita contributors to the problem have been the developed countries, and frankly until they make a dent in their emissions the issue is not going to be resolved. That opinion is shared quite commonly among a large spectrum of Indians, and there’s no reason why the Modi government will differ from that.”

But it is ultimately the priorities of electorate that determines the content of the parties’ manifestos, as each attempts to score political points over the other. The continued lack of awareness means this will go down as just one more exercise in democracy where climate change was forced into the back seat.

Yet there is something of a disconnect in this, considering the other dominant concern in India at the moment: the oncoming rains. 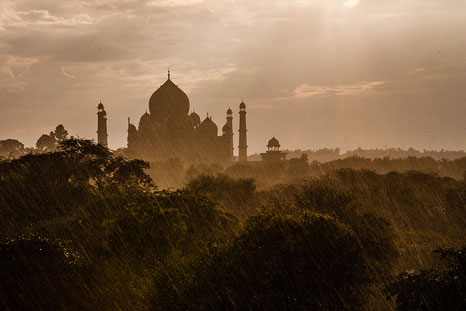 “What matters to the common man is what the rains are going to be like this season and whether the bread baskets are going to be full. No matter what happens in the elections the monsoons will show us the way,” says Pandit.

“The impact of climate change on the weather is not an easy subject, but more emphasis could be put on it to raise awareness of people, so they can hopefully vote accordingly.”