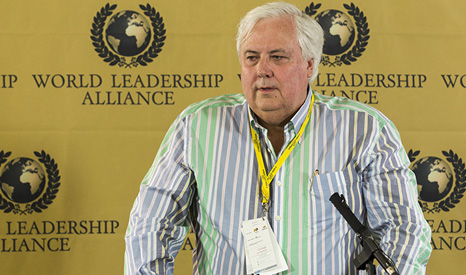 Tony Abbott’s attempts to scrap Australia’s carbon tax have been delayed for a week after Senators rejected an amendment to the legislation.

The PUP, which holds the balance of power in the Senate, had submitted an amendment to the new laws meaning power companies not passing on carbon tax price reductions to consumers would be fined.

In a lively press conference Palmer described “violent” scenes after the vote, accusing the government of trying to deceive him into thinking his amendment was included in the text.

“Our Senators went into the Senate thinking the amendment would be on the paper… fortunately I can still run fast from my office to get them to the Senate, and we were able to get them out.”

“Within 10-15 minutes they were in our Senate leader’s office. I was receiving phone calls – there were nasty conversations.”

No guarantee from @PalmerUtdParty senators that they will vote on repeal of the carbon tax. @TonyAbbottMHR government playing games #auspol

Introduced in 2012, the tax on heavy emitters was a key part of Australia’s plans to meet its international target of cutting emissions 5% compared with 2000 levels by 2020.

While the government is likely to see the tax repeal through next week, the result will be an embarrassment to the prime minister, who has taken a ‘pledge in blood’ to cut climate regulations.

Ahead of the vote, Abbott, who has previously branded climate science as “absolute crap”, said this was “the day when the carbon tax is finally scrapped”.

“We remain calmly, methodically, determined to continue to proceed until the carbon tax is repealed,” Environment Minister Greg Hunt said in a subsequent press conference.

Environmental groups say the government should use this brief delay to reassess its strategy and consider keeping the tax, arguing it is achieving its objectives without damaging the economy.

John Connor, CEO of The Climate Institute NGO, said the lack of a coherent climate policy will cause more uncertainty and volatility for business and our economy.

“The alternative option should be to take a deep breath, if needed reduce the price, but retain the underlying operating framework with emissions trading starting on 1 July 2015,” he said.

“We now also have an opportunity to let the independent Climate Change Authority review global climate action, and based on that, recommend what Australia should be doing.”

Asked if he’d considered the consequences of the vote, and the implications for a further delay in scrapping the tax, Palmer said: “I guess they should have thought about that? Maybe they’ll think about that next time?”

The mining magnate, who has previously expressed climate sceptical views, recently confirmed he will also block legislation to scrap the Climate Change Authority and the Clean Energy Finance Corporation.

He said he would support an emissions trading scheme and demand that the current 20% renewable energy target stays in place.