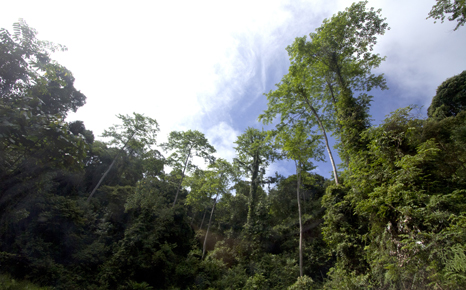 Forest rich nations say they deserve payment to protect their natural resources, since they perform valuable services for the planet

Logging, burning and developing plantations in the Amazon rainforest is releasing 54 million tonnes of carbon a year, Brazilian and British scientists have found.

The impact of wildfires, selective logging and the encroachment of pastures and plantations on the rainforest is harder to monitor than that of wholesale deforestation, they said.

This study, published in the journal Global Change Biology, shows such degradation could account for up to 40% of the carbon loss caused by deforestation in the region.

The researchers said efforts to conserve forests, such as the reducing emissions from deforestation and forest degradation (REDD+) programme (see factbox below), will “remain limited in their success” unless they address these problems.

“The impacts of timber extraction, burning and fragmentation have received little notice because all the efforts have been focused on preventing further deforestation,” said lead author Erika Berenguer, from Lancaster University in the United Kingdom.

“This attitude has resulted in tremendous progress in conserving the Brazilian Amazon, whose deforestation rate fell more than 70% over the past 10 years.”

Since 2004, Brazil has seen a 70% decline in deforestation, which scientists calculate amounted to a 1.5% drop in global carbon emissions in 2013, although critics point out clear-felling increased by 28% in the same year.

REDD stands for reducing emissions from deforestation and forest degradation. The plus sign represents positive action to promote sustainable forestry and enhance carbon stocks in forests.Logging, fires and conversion of forest to agricultural land account for nearly 20% of global greenhouse gas emissions.

Halting deforestation has a significant role to play in tackling climate change. REDD+ works primarily by paying countries not to cut down trees. Industrialised nations are expected to finance it as part of a wider commitment to raise at least $100 billion a year by 2020 to help developing nations cope with the effects of climate change and curb emissions. But developers have struggled to raise funds as projects are often located in countries with poor governance records.

The study, which is the largest of its kind to date, comes as policymakers meet in Lima to develop a global strategy to protect forests.

The policy board for UN-REDD, which is a core part of REDD+, is considering its five-year strategy. This will include its contribution to critical climate talks in Paris next year.

Speaking to RTCC before the meeting started on Tuesday, Tim Christophersen of the United Nations Environment Programme (UNEP) said the strategy needed a “complete upgrade” to take into account developments since 2008.

“Now the challenges are quite different,” said Christophersen. “They are about quickly making sure we have the capacity in place, that we have the finance and the solutions to get a strong agreement adopted in Paris next year.”

The board will also consider submissions from Mongolia, Argentina and the Ivory Coast to set up national plans. If successful, they will bring the number of active programmes to 21. UN-REDD has 53 partner countries.