Kerry hints at “common ground” between US and China on climate

US Secretary of State says this week’s climate talks have been productive, but warns of further challenges 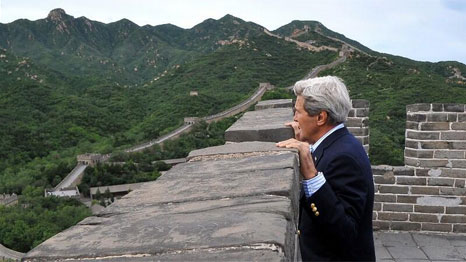 US Secretary of State John Kerry has hailed the growing understand between the US and China on climate change, after the countries signed eight deals to cut greenhouse gas emissions.

At the main annual economic dialogue between the two global powerhouses, Kerry highlighted that through joint deals and initiatives the two countries were converging on efforts to cut the greenhouse gases responsible for warming the planet.

“Despite our differences, our two nations have the ability to find common ground,” he said, speaking alongside Chinese vice premier Wang Yang.

Climate change issues have been pushed as a top priority for the high-level talks. Kerry added that how the two countries deal with the problem will determine the quality of economic growth.

“Ultimately, the true measure of our success will not be just whether our countries grow, but how our countries grow. And that is one area where we have made real strides in the deepening of our relationship on climate change and clean energy,” he said.

Speaking alongside Kerry, Vice Premier Wang Yang talked of “greater opportunities of cooperation for both countries”, stressing the urgency of “concrete action”.

“I also understand that many people in the world are watching how China and the U.S. will perform on the issue of climate change in this round of dialogue,” he said.

On Tuesday, eight companies and research bodies signed agreements to cooperate on low carbon projections: four on carbon capture and storage, and four on smart grids.

“This accelerates sharing of information on carbon capture and storage for power,” said Julio Friedmann, deputy assistant Secretary for Clean Coal for the US Department of Energy.

Despite deals and bilateral talks, there is still a deep rift between the US and China on how a new UN climate treaty, scheduled to be signed off in 2015, should be applied.

China is backing an agreement that maintains a legal separation between developed and developing countries, based on a list that the UN drew up in 1992.

The US wants to do away with this division, which it says means emerging economies can get away without making any emission cuts.

US climate envoy Todd Stern, speaking in Beijing today, described it as “one of those conversations that just goes on and on and doesn’t stop.”

He said that he had engaged in “quite detailed conversations” with the Chinese about a post-2020 target for greenhouse gas reduction, but added that the two teams were still not discussing concrete numbers.

“It is more what is your process for developing a target, what sort of form you think your target is going to take. What are the policies that underpin the target you are going to develop?”

Stern and his counterpart, Chinese negotiator Xie Zhenhua, chaired a full day of policy dialogue on 8 July aimed at coordinating efforts to reach a deal.

Earlier on Wednesday, researchers from Point Carbon at Thomson Reuters warned that a failure to agree on a post-2020 deal to reduce emissions at the Paris conference means the world’s “carbon budget” will run out by 2037.

This budget is the amount of carbon dioxide that the world can emit before the world exceeds 2C, a level deemed dangerous by scientists.

They add that pledges put forward by the countries will have to be much more ambitious than they are currently.

“In our scenarios, the carbon budget runs out between 2037 and 2048 regardless of whether Paris is a huge success or not. The world just can’t escape the fact that so many emissions have already occurred,” said Frank Melum from Point Carbon.

“Even if China implemented emission reductions to the same extent as Europe’s proposal [40% reduction by 2030] – a politically unimaginable scenario – the carbon budget only lasts an extra two years.”