UK climate advisors say flood defences are not being maintained, and planning laws do not factor in future risks 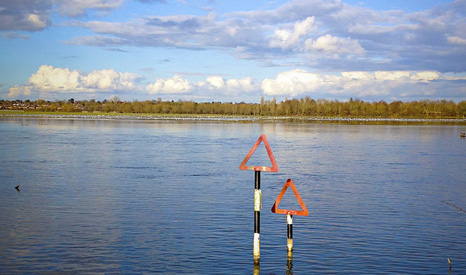 The Committee on Climate Change (CCC) warns around three-quarters of existing flood defences are not being maintained as they should each year.

It says this means this year’s heavy floods, which submerged parts of Somerset and the Thames Valley, could be repeated if the country experiences heavy rainfall.

“Events such as last winter’s storms and floods illustrate the costs of a lack of resilience, with many thousands of people forced to leave their homes, businesses and transport disrupted, with the associated costs to the economy and to well-being,” he said.

“Building resilience for the future is an essential component of the nation’s strategy for a healthy population and growing economy.”

Railways, main roads and airports are also at risk the report says. A major rail link between London and the south west was out of service for four months this year after coastal erosion.

The government says it has allocated £3.2bn between 2010-2015 on flood management and coastal defences.

Download the report here. Below we’ve highlighted some of its key messages.

“Continuing development on the floodplain is increasing the reliance on flood defences. Under-investment in these defences is storing up costs and risks for the future. Hundreds of flood defence projects are currently on hold. Despite recent improvements in asset management, three-quarters of existing flood defences are not being sufficiently maintained.”

“Electricity transmission and distribution companies are implementing comprehensive strategies to safeguard the resilience of their networks to climate change. Network Rail is taking many of the necessary steps. However, there are shortcomings in the approaches being taken by water companies, and for strategic roads, ports and airports, and ICT services.”

“Heatwaves are likely to contribute to more deaths in the future, due to climate change combined with an ageing population. A Heatwave Plan has been introduced to reduce the public health impacts arising from periods of high temperatures. However there is a more fundamental need to adapt the existing building stock and design new buildings to be safe and comfortable in a hotter climate.”

“The capacity in the emergency response system to manage severe weather events needs to be evaluated, particularly in the context of climate change. This evaluation should include the required national capability for flood rescue, how budget reductions across a number of agencies might have affected the collective ability to respond, and the coverage of climate hazards in community risk registers. Failure to address these issues in a coordinated way between national and local responders risks inefficiency, confusion, and resource shortages in the event of a crisis.”

Next steps:
July 2015 – UK Adaptation Sub-Committee to present statutory report to Parliament on the progress being made to prepare for climate change.
July 2016 – independent evidence report in July 2016 to inform the Government’s next UK Climate Change Risk Assessment, due in January 2017.