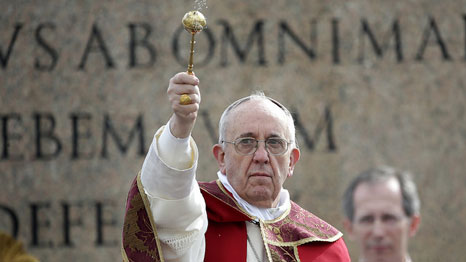 In a speech the University of Molise in southern Italy, Francis called attention to the destruction of the rainforests, including in his own country Argentina.

“This is one of the greatest challenges of our time: to convert ourselves to a type of development that knows how to respect creation,” he said.

“When I look at America, also my own homeland (South America), so many forests, all cut, that have become land … that can longer give life. This is our sin, exploiting the Earth and not allowing her to her give us what she has within her.”

The UN’s science report says that deforestation is responsible for around 10% of greenhouse gas emissions caused by humans.

In Argentina, around 16 million hectares of Argentina’s forest cover was lost between 1980 and 2000, according to the UN’s Food and Agriculture Organisation.

Francis has repeatedly called for environmental protection since he became Pope in March last year.

Named after Francis of Assisi, the patron saint of animals and the environment, the head of the Catholic Church is currently writing an encyclical on man’s relationship with nature.

The Pope’s speech is the latest in a series of interventions by religious leaders into global environmental politics,

Representatives of all major religions have indicated they will mobilise on climate action ahead of a landmark summit to be held at the UN headquarters in New York this September.

The World Council of Churches has announced that it will hold an Interfaith Summit on Climate Change in New York on September 21-22, the two days before UN Secretary General Ban Ki-moon hosts the summit.

The WCC is a coalition of 345 churches, representing Christians across Europe, America, Africa, Asia, the Caribbean, Latin America, the Middle East and the Pacific.

“We have to be the moral voice in this,” she added.

Daniel Murphy, a campaigns assistant at the Environmental Justice Foundation, said: “We will join our voices in the call for human rights and climate change to be addressed systematically.”

WCC members reinforced that they hoped their voice would also be heard at the UN’s major annual climate conference in Lima this year, and in Paris 2015 where a new agreement to combat climate change is due to be signed.