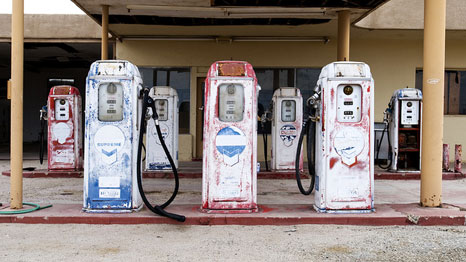 A movement is underway in America to get gas pumps labelled with warnings about climate change.

The small, unfunded campaign, called Our Horizon, was launched in 2013 by Rob Shirkey, a former lawyer who decided that the way to get action on global was to let people know that they are personally responsible each time they fill up their car.

“It engages people in a different way from newspapers, television and books,” said Shirkey. “It drives the issue into the palm of your hand. It makes the issue more personal.”

Now, two cities in the US and Canada are considering making it happen.

Councils from Berkeley in California and West Vancouver in Canada are set to vote on whether local gas pumps should carry climate change warnings.

“It could very well be that this fall we have two precedents, and we’re hoping in the interim to leverage these examples of leadership,” said Shirkey.

Stickers feature phrases such as “Warning: Use of this fuel product contributes to climate change which may put up to 30% of species at a likely risk of extinction.” 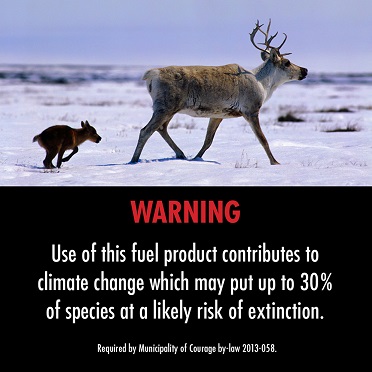 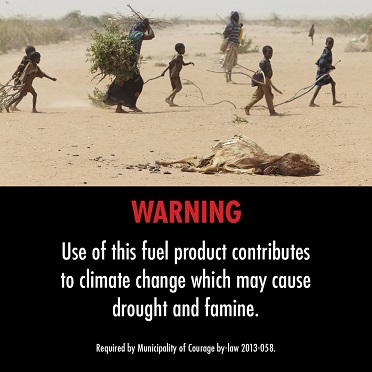 Globally, transport is responsible for around 23% of energy-related carbon dioxide emissions. This is growing, despite vehicles becoming more efficient.

Shirkey says he hopes to partner with other organisation to take the movement worldwide, but is starting in Canada, where he hopes to make the fuel pump stickers an election issue in Ontario this October, when municipal officials will be voted in.

He is also expanding his one-man band by crowdsourcing enough funds to employ a student to drive the campaign further. Donations of $50 are rewarded with an autographed copy of a legal report explaining the background to the by-law.

By working at a level of cities and towns, he hopes that the campaign will be able to bypass the federal government’s reluctant to take action on climate change.

While Stephen Harper’s conservative government has withdrawn Canada from the Kyoto Protocol and is pushing to exploit its highly polluting tar sands, regional governments have taken a more progressive stance on climate change.

British Columbia, for instance, has adopted a carbon tax, while Ontario has phased out coal power.