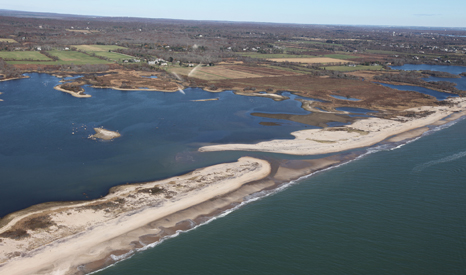 The US state of Rhode Island has passed a climate change act, outlining how it should cut fossil fuel use and prepare for future extreme weather events.

The Resilient Rhode Island Act was passed on June 19, approved on the floor of both state chambers, which are dominated by Democrats.

It also includes provisions for a series of carbon budgets every five years, to assess the targets and see if they can be increased, and establishes a climate change coordinating council advisory board.

The Act says: “Consideration of the impacts of climate change shall be deemed to be within the powers and duties of all state departments, agencies, commissions, councils and instrumentalities, including quasi-public agencies, and each shall be deemed to have and to exercise among its purposes in the exercise of its existing authority.”

According to Timmons Roberts, Professor of Environmental Studies and Sociology at Brown University in Providence, the experience of Sandy in 2012 and Hurricane Irene in 2011 made tough action an “easier sell” for Representative Art Handy, the driving force behind the bill.

“His vision was that preparing for rising sea levels and more intense storms should become ‘business as usual’ in state agencies, and that climate impacts should be considered in every state and local bond issue and infrastructure project,” said Roberts.

Currently 28 US states have climate action plans and nine have state-wide emission targets.

Nine East Coast states including Rhode Island are part of the Regional Greenhouse Gas Initiative (RGGI), a cap and trade scheme formed in 2003.

States will have flexibility in how they comply with the required pollution reductions, such as through carbon trading programs and by mandating minimal levels of renewable energy in the power sold by utilities.

The US currently has international obligations to cut nationwide emissions 17% on 2005 levels by 2020, a target it could increase ahead of a proposed UN global climate deal in 2015.

Any new plans to cut carbon pollution are likely to receive a hostile welcome from the Republican Party, which appears largely set against any climate regulations.

On Wednesday night President Obama accused his critics in Congress of feigning ignorance of climate science to ensure they stay in office.

“They ducked the question and said ‘Hey, I’m not a scientist,’ which really translates into ‘I accept that manmade climate change is real but if I say so I will be run out of town by a bunch of fringe elements,” he said.

Earlier in the day the White House released a ‘climate scorecard’ outlining its achievements and ambitions in addressing global warming.

“We have proven that the U.S. can and will take the lead on climate action, while lowering household energy bills, creating good paying jobs that cannot be outsourced, and protecting our homes, businesses, and way of life from extreme weather events and climate change,” it read.