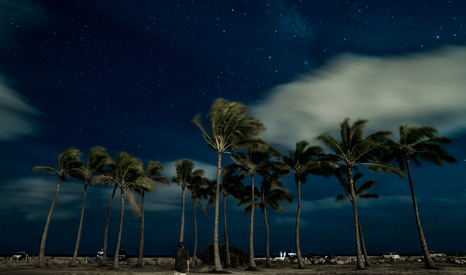 Hawaii has passed a law to protect the state against the impacts of rising oceans and dying coral reefs.

Government Neil Abercrombie signed the bill on Tuesday, which will guide state efforts to adapt to climate change up to 2050.

Hawaii is particularly vulnerable, as it has the fourth largest coastline of all US states, and yet it is one of the last to adopt a statewide adaptation plan.

“Planning ahead now will save billions of dollars for our next generation and it will make us secure, safe and give our next generation of children an opportunity to much of the same Hawaii that we have today,” said Representative Chris Lee, who introduced the bill.

The Act will establish a climate council, active from 1 January 2015, to coordinate climate action across different departments within the state government. It means that Hawaii will have to create plans on how it will adapt to climate change in both the long- and short-term.

Climate change is the “paramount challenge of this century” and poses an urgent threat to the State’s economy, sustainability, security and way of life, it says in the Act.

It adds that the impacts, including beach erosion, drought and rising temperatures, are already visible, and are expected to accelerate in years to come. The impacts on Hawaii’s indigenous communities would be particularly severe, it said, with destruction of coasts and fisheries threatening their traditional way of life.

“We have seen rising sea levels, erosion of our shoreline, and various other effects of global warming on the increase in the last year,” said Representative Henry Aquino.

In May, a federal US government report concluded that climate change was now a present-day threat for the country.

Yesterday, Vermont released the first state-level climate assessment, which suggested that the state’s maple syrup industry was just one aspect of local life that could decline due to heavy rainfall and hotter summers.

Hawaii has previously shown concern over climate change, signing the Majuro Declaration for Climate Leadership, a Pacific Islands initiative, as the first sub-national government in 2013.

Governor Abercrombie was then appointed as one of eight state leaders on Obama’s climate task force.