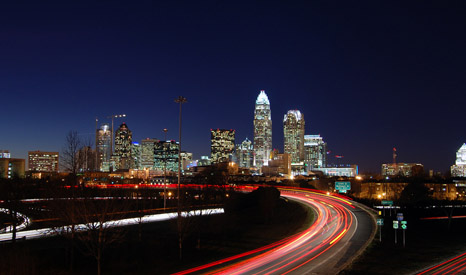 Cutting air pollution reduces deaths from lung disease, according to a detailed study in North Carolina which supported similar findings in a recent report by the World Health Organisation.

The findings might suggest additional, local health benefits from steps to tackle climate change, although such wider analysis was beyond the scope of the study.

Burning fossil fuels and biomass produces a cocktail of pollutants including particulate matter (PM) in smoke, and chemicals such as sulphur dioxide (SO2), nitrogen oxides (NO2), carbon monoxide (CO) and ozone (O3).

The latest study added to existing knowledge by using especially long-term data, from 1993 to 2010, and for a particularly wide range of air pollutants.

By controlling for other influences on lung disease, and notably smoking, the authors were able to tease out associations between air pollution and death from illnesses including emphysema, asthma and pneumonia.

Emphysema is a condition where the lungs become progressively more damage and constricted, leading to breathlessness.

“We found significant correlations between reduction of air pollutants and dynamics of deaths due to respiratory diseases during the period we studied,” said the authors, from North Carolina’s Duke University, publishing in the International Journal of Chronic obstructive pulmonary disease.

In March, the World Health Organisation reported that in 2012 some 7 million people died as a result of air pollution exposure, making it the world’s biggest killer.

Increasingly stringent US gasoline and automotive engine rules have resulted in a decrease in CO, NOx, PM, and volatile organic compounds in the air.

“We found air quality in North Carolina gradually improving over time, primarily due to decreasing PM10, NO2, and CO levels,” the study authors said.

“These decreases became more pronounced from 2002.”

“Improved air quality in North Carolina since the mid-1990s is related to a series of federal and state acts and regulations, including the national heavy-duty truck engine standards, reduction of NOX emissions, the Clean Smokestacks Act, and new engine standards.”

Burning fewer fossil fuels may help reduce both air pollution and climate change, as a source of both carbon dioxide and pollutants.

Analysts say that people may better accept climate policies, which are expected to raise energy prices, if they see an immediate local benefit in fewer lung disease deaths, compared with the longer term, global benefit of avoided climate change.

Complicating the picture, however, climate scientists say that reducing air pollution also cuts emissions of certain light-reflecting aerosols which are thought to cool the Earth.

As a result, the net climate outcome from reducing air pollution is uncertain, and an important area of climate research as big polluters such as China take rapid steps to boost air quality.

Some scientists attribute a rapid increase in global average temperatures in the 1970s and 1980s to the introduction of the US Clean Air Act in 1970 and similar, European laws.

And some explain a slowdown in global average warming in the last decade at least in part to a rapid rise in air pollution from emerging economies and especially China.