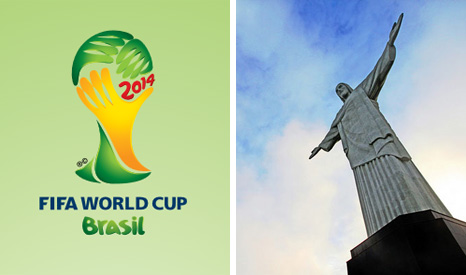 Brazil wants owners of UN carbon credits to donate them to the organisers of this year’s World Cup, offsetting the tournament’s emissions in return for free publicity.

The government hopes that up to a million credits known as certified emission reductions (CERs) from the UN’s Clean Development Mechanism will be made available.

All donated credits must originate from Brazilian CDM projects. If realised, this would be equal to taking 30,000 cars off the road.

UN climate chief Christiana Figueres welcomed the announcement, but said she would reserve judgement until the results of the initiative were revealed once the tournament ended.

“I wish Brazil and FIFA every success in their endeavours and look forward to a rigorous assessment after the final whistle blows on what was actually achieved in respect to climate neutrality,” she said.

“Big sporting events are increasingly winning green medals for their environmental performance. In doing so they can inspire the wider society to wards climate action in support of a better world.”

Brazil’s government has spent around $11 billion in preparations for the tournament, but says it has no plans to buy any offsets itself, despite the current low price of CERs.

Critics say this latest announcement is a token gesture – rather than a significant effort by organisers to cut the World Cup’s environmental footprint.

“I didn’t see much stimulus to reduce emissions during the preparation,” Ernesto Cavasin, president of Brazil’s Association of Carbon Market Companies told Reuters.

“Brazil should have pushed for green technologies on areas such as lighting, waste management and energy, and it could use credits from those projects to neutralize the Cup’s emissions.”

Given the large number of stadiums under construction and the huge distances teams and fans will have to travel inside Brazil, the 2014 World Cup could be one of the most carbon intensive yet.

According to data from consultants at E&Y, the carbon footprint of the 2010 World Cup is estimated at 896,661 tonnes of carbon, with an additional 1,856,589 tonnes contributed by air transport.

The overall emissions of the 2010 World Cup in South Africa were around 2.7 million tons of carbon dioxide equivalent (CO2e), two thirds from international transport.

This was around eight times greater than the 2006 World Cup in Germany.