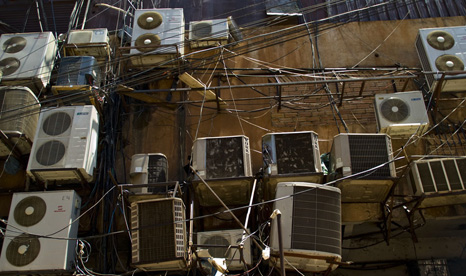 Around 90% of HFCs today are used in refrigeration and air conditioning units  (Pic: Cristina Valencia/Flickr)

Banning potent global warming gases used in air conditioners and fridges by 2020 would avoid the cumulative release into the atmosphere by the middle of the century equivalent to at least three times present, total annual greenhouse gas emissions, a study has found.

Proposals made by the United States, Canada and Mexico last week fell far short of such action, to phase down, not ban altogether, such hydrofluorocarbons (HFC) gases.

The use of HFCs has grown rapidly as replacements for ozone-depleting chlorofluorocarbons (CFCs) that are being phased out under the Montreal Protocol.

However they are exceptionally powerful greenhouse gases, more than 1,000 times more potent than an equivalent amount of CO2.

The climate threat they posed was even higher once the gases presently stored in refrigerant equipment was included, alongside annual emissions, the latest study found, published on Monday in the journal Atmospheric Chemistry and Physics.

The authors described the problem as one of “HFC banks”, which could release their greenhouse gases many years after an eventual ban, because such air conditioners and fridges lasted up to a decade or more.

“A key finding of our work is that the increases of HFC banks represent a substantial unseen commitment to further radiative forcing of climate change also after production of the chemicals ceases. We show that earlier phase-outs of HFCs would provide greater benefits for climate protection than previously recognized, due to the avoided build-up of the banks.”

“Choices of later phase-out dates lead to larger commitments to climate change unless growing banks of HFCs from millions of dispersed locations are collected and destroyed.”

The notion of a phase down of hydrofluorocarbons (HFCs) has gained international traction. The United States and China agreed last year to work together to reduce their use.

The latest study quoted UN data that atmospheric HFC levels had grown rapidly by 10–15% annually from 2006 to 2010.

However, there had been no systematic measurement of the pent up emissions stored in HFC banks, the authors said.

They calculated that under current production trends, HFC banks would contain many tens of billions of tonnes of CO2-equivalent greenhouse gases by 2050, compared with annual CO2 emissions now of around 35 billion tonnes.

The problem could be tackled in one of two ways: collecting and destroying the gases inside refrigerant equipment, under the terms of any phase-out; or phasing out HFCs earlier, to reduce the size of the eventual stocks.

While the destruction of equipment would allow a later phase-out, it was complicated by the presence of many millions of individual refrigeration and AC units worldwide.

The United States, Canada and Mexico last week proposed to phase down production of HFCs to around 15% of current levels by 2035 in developed countries, and by 2045 in developing countries.

Such a proposal implied tens of billions of tonnes of extra CO2-equivalent HFC emissions and stocks by the middle of the century, the study showed, compared with a 2020 ban.