New US power plant standards, due in June, will be the ultimate litmus test of Obama’s Climate Action Plan 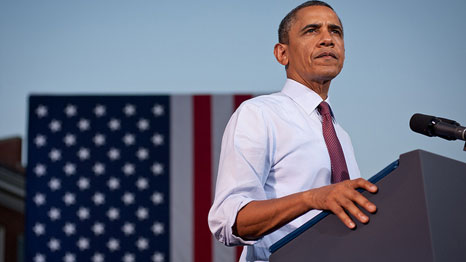 In two weeks’ time, Obama will give the strongest sign yet of whether his plans to tackle climate change are fact or fantasy.

This sign will arrive on June 1 in the unassuming guise of new rules on America’s main source of pollution – coal-fired power plants.

The new standards will be the centrepiece of Obama’s climate change agenda. So far, he has introduced new fuel efficiency standards, a plan to tackle methane emissions, and rules for new power plants. But it is these standards that will be the ultimate test of whether he can to follow through on his pledge to cut emissions 17% on 2005 levels by 2020.

They are also likely to be the most contentious of Obama’s climate actions so far, inviting backlash from the host of Republicans accusing the president of waging a “war on coal”.

The regulations are currently one of the “best kept secrets in Washington DC”, says Jake Schmidt, international climate policy director at the US-based Natural Resources Defense Council, but whatever the administration proposes will have an impact on climate policy, both domestically and internationally.

“The new standards will be a very critical signal on whether US is going to be able to meet 17% target,” he said. “If they go for a low standard, the prospect is very challenging.”

In the US, power plants account for roughly 40% of the nation’s total emissions each year.

Domestically, Obama has made an effort to match his rhetoric with action. Yesterday, John Holdren, director of the White House Office of Science and Technology Policy, said: “Clearly the president regards this as part of his legacy to really turn the country around on climate change and he aims to get that done.”

But with the continued obstacle of a divided Congress, Obama has had to resort to executive actions to make these changes – an approach he promised in his Climate Action Plan which he dropped into the lap of the American public on a sweltering day last June.

By using existing legislation, such as the EPA’s Clean Air Act, emissions are now 10.7% lower than they were in 2005 (although some of this can be attributed to replacing coal with the cleaner shale gas) taking the US towards its 17% target.

“This administration certainly is doing pretty much everything that’s in its authority to try to address the problem,” said Jennifer Morgan, directory of climate and energy at the World Resources Institute. “This is the first time you’ve seen an American president indicate a deep understanding of the risks to the country.

“With the EPA’s upcoming announcement of its power plants standards, I think you’ve seen a reinvigoration of the discussion that looks to the risks to the US and also what the technological and the policy options are for responding.”

But the job is far from done, and Obama himself recently acknowledged that, without the support of Congress, his attempts to tackle climate change have been less ambitious than he would have liked.

Announcing a new set of solar initiatives last week, he told an audience assembled at Wal-mart that “Regardless of how hard I push, regardless of how many administrative actions I take, we’re not going to be able to go where we need to go, and can go, and should go unless I’ve got a Congress that’s willing to work with me.”

As if to prove his point, three days later a humble bill on new energy efficiency standards was voted down in the Senate, after it became entangled with the more contentious debates such as the Keystone XL Pipeline and other climate regulations.

“These aren’t huge, bold things. But this is larger than losing this energy-efficiency bill,” said Margot Anderson, executive director of the Bipartisan Policy Center’s Energy Project, in the New York Times.

“People are worried that if we can’t even pass that, we’re not in good shape to tackle the bigger stuff. We can’t even get warmed up.”

Meanwhile, the anti-climate contingent of American politics continues to have an impact in Congress. Most recently, Florida Republican drew criticism for his denial of climate science, saying: “I do not believe that human activity is causing these dramatic changes to our climate the way these scientists are portraying it.”

But the EPA’s new coal standards will provide more than just a prognosis on the state of health of Obama’s domestic climate policy. It also has implications for the US contribution to an international UN climate treaty, which countries have agreed to sign off in Paris in 2015. Its terms will determine global action on climate as from 2020.

This post-2020 target is America’s contribution to a UN climate deal set to be signed off in Paris next year. It will provide an indication of how far the US has come since the beginning of the international climate negotiations, when it refused to ratify the legally-binding Kyoto Protocol.

While the US has become a more willing partner under Obama in the dialogue over how the new treaty should look, it is unlikely that an international treaty proposing tough action on climate would get through Congress, where it would require the consent of two-thirds of the Senate, or even if the legal form of the new agreement would require it to be passed through Congress at all.

This makes it all the more vital that Obama makes domestic short-term decisions, like the EPA regulations on coal, that will enable him to meet aggressive international targets in the long run without the need for new legislation, says Schmidt.

“It’s clearly going to be a little while before congress changes its tune. There’s a set of things that the next administration can do that don’t require going back to Congress,” he says.

“We have been very clear in saying that we should not premise whatever the US does in the post-2020 timeframe on the need for new legislation. It would be nice if new legislation came, but let’s not pretend that we can only achieve aggressive action if we have new legislation because I don’t think that’s true.”