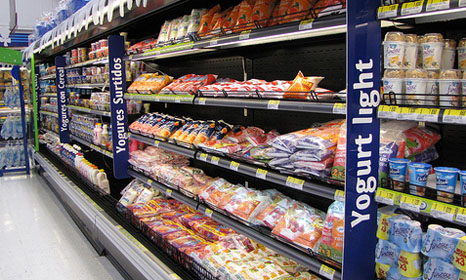 ‘Chilling Facts’ reveals over 2,400 UK stores, equating to 20% of commercial fridges, are now using a group of non- warming coolants commonly referred to as natural refrigerants.

HFCs, a commonly used acronym for hydrofluorocarbons, are rising 10-15% a year and could hit the 5.5-8.8 GtCO2e (gigatonnes of carbon dioxide equivalent) by 2050.

Supermarket and food refrigeration accounts for approximately one third of that figure.

“Moving away from HFCs is a double win for the climate, reducing energy demand and eliminating the need for these climate-damaging refrigerants,” said the EIA’s Fionnuala Walravens.

A series of initiatives to curtail the use of HFCs have been launched in the past 12 months.

Recently G20 countries issued a statement agreeing to explore measures to “phase down the production and consumption of hydrofluorocarbons”.

The USA and China have made a priority for their new climate change working group, while the 33 country strong Climate and Clean Air Coaliton is also working on measures to cut their use.

The EU is also in the process of rewriting its regulations, which centre around phasing down the supply of HFCs to the EU market from 2015.

“The EU’s new rules should support this green economy and ensure a swift reduction in the availability of HFCs, supported by bans in new refrigeration and air-conditioning equipment.”

Tesco, Waitrose and Marks & Spencer are leading UK supermarkets in developing and installing alternatives to HFCs say the EIA, with Aldi Sud and Coop Schweiz impressing in Europe.