World leaders will gather in New York in September for a much hyped Climate Summit. Are they ready? 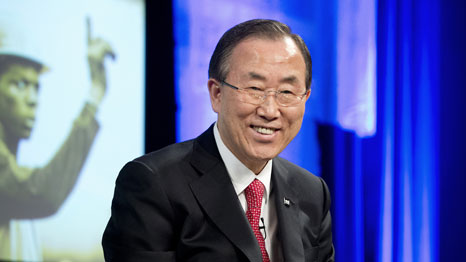 World leaders will take a trip into uncharted territory this September, as they travel to New York to answer the call of the UN’s Secretary General Ban Ki-moon.

It is rare that the world of climate policy offers an opportunity for novelty. Climate change negotiations are a stage upon which the same lines, the same disputes, have been rehearsed to exhaustion since they began in 1992.

But Ban Ki-moon’s request that world leaders come to him personally and deliver “bold pledges” on how they intend to tackle climate change is different.

At this one-day Summit, scheduled for 23 September, there will be no official negotiations or political trade-offs. Optimistic observers have even suggested there may be no animosity.

Instead, this is an opportunity for heads of states to come together – for the first time since the disastrous UN conference in Copenhagen in 2009 – alongside leaders from business, finance and civil society, and make individual pledges on how their countries intend to put a stop to climate change.

Expectations for the Summit are high. If the pressure not to disappoint Ban Ki-moon is not enough, prime ministers and heads of states will realise that their assembled presence means that world will, for this one day at least, be focused on their personal level of commitment to create a safe planet for the future.

While this Summit is organised by the UN, it is separate from the negotiations that take place under the banner of the UN Framework Convention on Climate Change (UNFCCC).

At these annual meetings, policymakers gather to thrash out with one another how a global treaty might look, which must be agreed by consensus between all countries – not an easy task, as the last 20 years have amply demonstrated. And the deadline is looming: countries have agreed to seal the deal in Paris next year.

While the UNFCCC negotiations are attended by environment ministers, the ‘leaders only’ set-up of Ban Ki-moon’s Climate Summit reflects the reality of how the content of the UN’s 2015 climate treaty will actually be decided, says Michael Jacobs, a former climate change advisor to UK Prime Minister Gordon Brown.

“Getting the leaders together to make commitments at this stage changes the game,” he told RTCC. “Climate policy is really economic policy, and you don’t control economic policy at national level if you’re an environment minister.

“You have to have your economy and finance ministers and your leader behind it, and getting leaders to focus again on climate is new. It hasn’t been done since 2009, and we’ve got a lot of new leaders since then.”

Meanwhile, giving countries an opportunity to replace negotiations with individual pledges is akin to declaring a one-day armistice: it allows leaders to declare their own ambitions without biting at others for their lack thereof – or worrying about being bitten.

On the surface, says Jacobs, this should lead to a more “harmonious” encounter of “mutually supportive ambition”, compared to the general discord that normally permeates negotiations.

What will be pledged?

So far so good: but once everyone has shaken hands and finished sharing fond memories of their last meeting in Copenhagen, what happens then? The unknown territory of this kind of meeting means that there is no recognised protocol for leaders to adopt at this Summit.

Last week, a high-level meeting in Abu Dhabi allowed the UN to smooth over any confusion. According to a presentation by UN Assistant Secretary-General Robert Orr, leaders should “provide vision of national effort and international goals” and “make announcements of future ambition and action through national action”.

Governments are already expected to make national pledges on their reduction of greenhouse gas emissions to be incorporated into the UN’s 2015 climate treaty.

Pledges at the Ban Ki-moon summit are likely to be made on a more flexible, ‘bottom-up’ approach, based upon individual sectors – and are almost certain to involve no numbers. 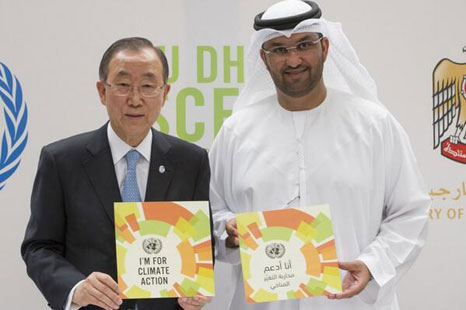 Elina Bardram, who is head of international relations at the EU Climate Commission, told RTCC that Ban Ki-moon is looking for examples of inspiring existing action and future commitments. And selfies. “He wants to have family photos of leaders who are committing in different action areas,” she said.

During the Abu Dhabi meeting, participants, including over 100 ministers, were invited to take part in discussions on eight topics, which amounted to “effectively a menu for countries to identify the kinds of announcements they might make”, said Jacobs.

Thomas Lingard, Global Advocacy Director at Unilever, told RTCC that the discussions within these forums progressed well. “Many of the breakout sessions on different issues had real momentum behind them,” he said.

“The ministers we spoke to, including Greg Barker from the UK, were very focused on pushing for real action from stakeholders in all sectors that could deliver offers of meaningful progress at the September summit.”

Bardram said that she hoped that member states would come forward with individual initiatives, as well as potentially with actions created by new coalitions within the bloc.

“I think it’s going to be a unique opportunity, so if it’s not taken up then it will be an omission on the side of the international partners,” she said. “The Commission is 100% behind trying to do its utmost to make sure the visibility and the opportunity is not missed.”

But despite positive words, much remains to be done if countries really plan to deliver promises of new action at the Summit, rather than simply reiterating previous actions or making flimsy statements about the need for ambition. “What Ban Ki-moon has said is ‘come with something, don’t come with just rhetoric,’” says Jacobs.

And is it really possible that, even under the watchful eye of the Secretary General, countries can completely step out from their trenches?

Despite an overall positive ambiance during ministerial meetings last week, differences in perception are still evident, says the EU’s Bardram.

Ban Ki-moon’s Summit is about kickstarting the race to the top, she said, “but many, particularly least developed countries, don’t feel empowered to participate in a race.”

In past years, poor countries have argued that the delay of rich nations to provide adequate climate finance has prevented them from making pledges, for fear that they will not be able to afford to deliver on them.

The decision to invite businesses in such force is also threatening to rankle, adds Bardram, with developing countries in particular saying that the focus on “transforming the economy” means that “humanity is somehow forgotten.”

Venezuela has expressed concern that the agenda is too pro-business, says Jacobs, and has suggested that the meeting “must also be about poverty and equity and local communities, and not just about what businesses can do,” – an intervention that he says was widely accepted, and is likely to be reflected in the final agenda.

But overall, the feeling remains hopeful that the Summit will yield concrete action: and it seems there is still every chance that when heads of state gather in the Ban Ki-moon booth for their souvenir family photo, the camera will not capture grimaces, but smiles.