Disasters will be more frequent and complex across even the most advanced economies, warns OECD report 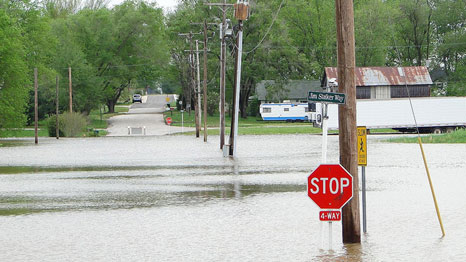 The world’s richest countries have encountered more intense disasters over past decades due to climate change and a degraded environment, according to a report from the OECD.

More frequent and complex shocks have cost hundreds of billions of dollars over past decades, and a lack of resilience means that the shocks are becoming more expensive over time, says the OECD, which represents 34 of some of the world’s most advanced economies, including the US, the UK, France and Australia.

The findings are significant as they undermine the idea that increasing impacts of climate change will primarily impact developing countries. OECD member countries account for 59% of the world’s GDP, 95% of world development assistance and over half of the world’s energy consumption.

“These disruptive events are happening more frequently and our ever-denser cities and interconnected economies mean the costs are getting higher all the time,” said Rolf Alter, Director of Public Governance and Territorial Development at the OECD, launching the report in Paris.

“Smarter risk management to improve our resilience to shocks is the only way to lessen the impact on societies and economies.” 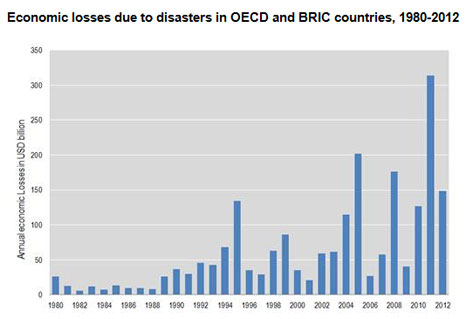 Climate change, along with factors such as urbanisation and a growing number of elderly people, are responsible for these trends, said the report, while increasingly globalised economies and societies mean that shocks in one country now reverberate around the world. This means that one country’s failure to prepare for disasters can have worldwide implications.

The report points out that many of the natural risks that will impact OECD countries over coming decades are expected to be more frequent and intense due to climate change, including heavy rainfall, droughts, and coastal flooding.

While the economic losses from disasters in OECD countries are higher than in lower income countries, they tend to make up a lower proportion of the GDP.

But, the report adds, the losses that do occur may be felt disproportionately at a local level. Hurricane Katrina in the US may have only cost 0.1% of the national GDP, but its impact was felt sorely in the area where the storm hit, where around 100,000 jobs and US$ 2.9bn in wages were lost.

“Disasters are a significant problem for the richest part of the world and I think this is the work that the OECD is doing in really opening up this conversation and demonstrating what it means in economic, social and, in fact, political and stability terms,” said Margareta Wahlstrom, head of disaster risk reduction at the UN.

The UN hopes to strike a new agreement on disaster risk reduction in March 2015, just nine months before the UN’s climate body is set to sign off another treaty aimed at limiting climate change.

While it is the poor countries who will be most vulnerable to the impacts of climate change due to their inability to finance adaptation and resilience measures, the report points out that among OECD countries, the US, Japan and Italy have suffered the most at the hands of large scale disruptive events over the past 40 years.

During a meeting this week in Paris, OECD ministers discussed the findings of the report, with a view to making its recommended policy changes to their governments.

The report suggests that governments should take action to raise public awareness and create financial incentives to encourage businesses and people to protect against risks. A “whole of society” approach could help to manage disasters in the future, it suggests, while international coordination and data sharing would help to lessen disaster costs.