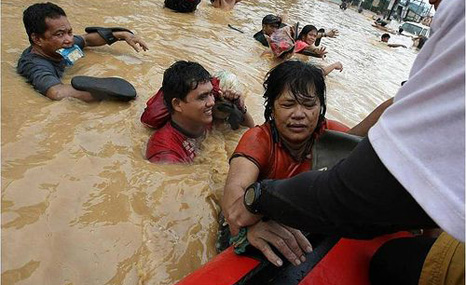 The UN hopes to seal a global agreement on reducing the risks from extreme weather events, earthquakes and tsunamis at a 2015 summit in the Japanese city of Sendai.

The new deal – set to be brokered by the UN’s office for disaster risk reduction (UNISDR) – is likely to focus heavily on climate change adaptation and resilience.

A successful outcome from the March summit could lay the foundations for separate talks on a UN emissions reduction treaty, scheduled for Paris in December that year.

Over 8000 delegates including ministers and heads of state will attend the Sendai meeting. UNISDR chief Margareta Wahlström says it will be a “rare opportunity to forge universal agreement on how to build disaster resilience across all sectors of society”.

In 2005 168 countries including the US, China and EU member states signed the Hyogo Framework, adopting a set of commitments to reduce vulnerabilities to natural hazards.

While decisions taken at the UNISDR are not legally binding, they are seen as a sign of the growing political engagement of governments towards managing risk, and are credited with laying the foundations for climate adaptation strategies.

Deaths from natural disasters have decreased in the past two decades, although the economic costs from storms, typhoons, earthquakes and tsunamis have continued to rise.

Analysts from the Germanwatch Institute say losses linked to extreme weather events between 1993-2012 amounted to US$ 2.5 trillion. Sonke Kreft, team leader at Germanwatch believes a new agreement will have to “actively promote taking climate change seriously as an emerging risk.”

The Sendai summit is expected to build on the Hyogo Framework with a new set of specific targets and indicators related to national disaster risk reduction.

These are likely to feed into the UN climate talks, according to ActionAid’s Harjeet Singh. “Most climate adaptation programmes are based on the experiences of disaster risk reduction,” he told RTCC, stressing that while Hyogo was not legally binding it has “produced substantive results.”

An example is the use of early warning systems to alert populations to incoming storms or tidal waves. One of the reasons Typhoon Pablo in 2012 is said to have claimed fewer lives than Typhoon Haiyan this year is the way areas hit by the former had invested in better and more extensive warning technologies.

Jerry Velasquez, the UNISDR’s head of Advocacy and Outreach says the destructive power of Haiyan demonstrates why a new agreement is important. “People now realise that this Typhoon in the Philippines is a wake-up call – things have to be done,” he says.

Velasquez hopes the outcomes of Sendai will encourage governments to see resilience as an economic opportunity. “We have been too negative in the past. In the future it will be what will we gain if we do this?”

Typically countries see risk management as a domestic issue, and with negotiations restricted to discussing programme-based solutions, there is little of the bitter politics that defines the UN climate change talks.

Singh admits “Obama and David Cameron won’t lose any sleep” about UNISDR agreements, while stressing their value in slowly changing the way countries perceive the issue.

Velasquez sees the March 2015 meeting as an opportunity to debate critical issues in a more comfortable environment, and as a means of building momentum in what could be a defining year for UN efforts to promote green growth.

“This is the first of the major agreements that will be adopted in 2015, and we hope this sets the stage for the SDGs and the climate negotiations,” he says.

“The only question in our mind is will they take the same indicators, that can filter up to the development and climate discussions? I think it will because it’s the same countries. There will be bigger implications.”