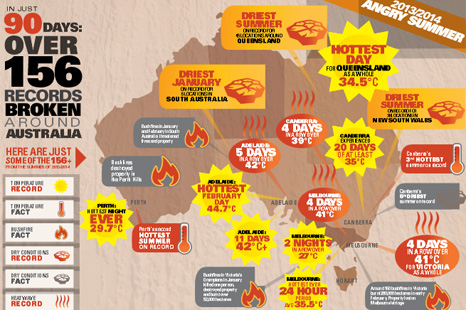 Australia’s government has been warned it must prepare for hotter summers and rising numbers of bushfires as a result of climate change.

A report from the independent Climate Council body paints a bleak picture for the continent, which endured record temperatures in the summer of 2013/2014.

“Although Australia has always experienced hot weather, it now occurs more often, and is more intense because of climate change,” it reads.

Record high maximum temperatures were recorded over nearly 10% of Australia.

The Council, which acted as official government advisors until Tony Abbott’s Liberal Party was voted into office last year, says the records are a sign that tough action to cut carbon pollution needs to be adopted.

It advocates “rapid, deep and long-term reductions”, saying that the current trend of rising emissions needs to be turned around by 2020.

“Australians have not yet reached a consensus on the need to decarbonize our economy and on the development of policies that will turn investments towards a decarbonized future,” the report adds.

“This challenge must be met if we are to minimize the risk of worsening extreme weather events for our children and grandchildren. It’s time to get on with the job.”

Despite evidence of rising temperatures, climate change has been a politically toxic issue in Australia for the past decade, dominating three general elections.

The current government is committed to rolling back climate legislation, and has promised to scrap the country’s carbon tax by July 1 this year.

Abbott has in the past described climate change as “complete crap”, and last month strongly rejected any link between Australia’s drought and global warming.

Australia has the highest per-capita emissions of any developed country, and currently has an international commitment to cut emissions 5% on 2005 levels.

President Barack Obama’s G20 emissary, Caroline Atkinson says the US wants to place climate high on the agenda when the G20 summit convenes in Australia later this year.

“In the G20 – whether it’s Beijing where there are issues of air quality, other countries where there have been extreme weather events or impending water shortages – I think there is a growing understanding of the importance in addressing that,” the Financial Review reports her as saying.

Leaders at last September’s G20 meeting in St Petersberg agreed to cut the use of hydrofluorocarbons (HFCs), a family of potent greenhouse gases found in fridges