Austria should decide on use of shale gas resources – IEA

Austria should consider energy dependency when deciding whether to use shale gas, says International Energy Agency 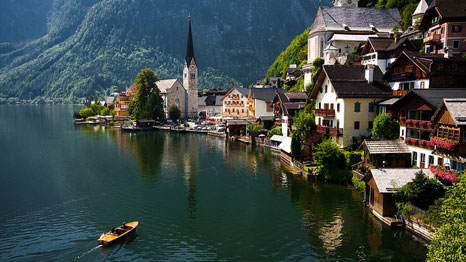 Austria should decide whether to exploit its domestic shale gas resources, given present dependence on Russian imports and tough environmental controls, the International Energy Agency said in a report on Wednesday.

The IEA is an energy advisor to OECD countries, and stopped short of explicitly saying that Austria should tap its shale gas.

Austria is not alone in taking a very cautious line in Europe: Germany has still no explicit position allowing shale gas development, while France has banned indefinitely the practice of hydraulic fracturing, the main technology used for extraction.

US shale gas extraction has drastically cut gas prices and imports, creating tensions in Europe between industry and environmental advocates over whether similarly to ramp up production.

In Austria, domestic environmental laws effectively prevent extraction by adding years to the time it would take to obtain a drilling permit, the IEA said.

Natural gas is an important source of energy in Austria, accounting for 22% of total primary energy supply. Imports accounted for four fifths of gas demand, and almost all these were sourced from Russia, where the Crimea crisis has reinforced security of supply concerns.

“The IEA recognises the sensitivity of this (shale gas) issue and encourages the government to formulate a position regarding the potential use of shale gas resources,” the agency said.

“The government has yet to develop a strategy or position at the federal and regional levels on shale gas opportunities and risks, nor has there been a well-informed and prepared public debate that would focus on economic benefits, environmental concerns and technological aspects.”

“The resources … are estimated to equal at least 20 years of domestic consumption, but the current regulatory framework effectively discourages the development of these resources since the obligatory environmental impact assessment process for each hydraulic fracturing well takes three to four years.”

The science is still unclear on the precise environmental impact of shale gas, but it appears likely that best practice extraction will lead to substantially lower greenhouse gas emissions compared with burning coal.

US carbon emissions from burning fossil fuels have fallen since 2010, largely because of a shift to gas.

But academic studies have yielded conflicting results on the impact of hydraulic fracturing on ground water, while environmentalists are also opposed to the industrialisation of the countryside through large scale shale gas drilling and extraction operations.

The IEA reported that in Austria, two wells north of Vienna recently failed because of public protest, and the new legislation requiring a mandatory environmental impact assessment for each well.

“EU-wide energy studies show that high import dependence and low diversification of imports can significantly contribute to increasing end user prices for industries and households. Energy efficiency and increasing local energy production would be the obvious answers. The position on shale gas should be considered also from this angle.”

The IEA has previously published guidelines which it said would satisfactorily address environmental concerns, in its report “Golden rules for a golden age of gas”, published in 2012. That report two years ago pointed to energy affordability and security of supply benefits.